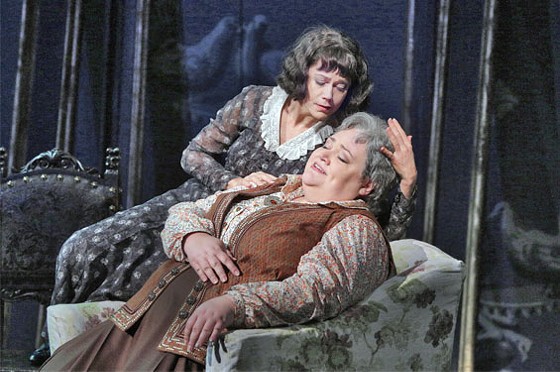 In 2011 Opera Theatre of St. Louis (OTSL) received a grant to commission three new operas. The first, Champion, an intense, tragic take on the life of boxer Emile Griffith, composed by jazz trumpeter Terence Blanchard, premiered last season. This season's entry, 27, based on the life of author and artistic midwife Gertrude Stein, opened last Saturday. It's a touching, funny, tuneful evocation of Stein's Paris salon at 27 Rue de Fleurus that served as a nexus for avant-garde artists and writers of the early 20th century.

Composer Ricky Ian Gordon and librettist Royce Vavrek have lots to work with. Stein's friends were a pantheon of artistic modernism. Painters Pablo Picasso and Henri Matisse, two of the dozens of barrier-smashing visual artists Stein championed, are featured in the early part of this opera. Between world wars we are treated to singing visits by photographer Man Ray, American literary innovators Ernest Hemingway (in hunting togs and dragging a dead rhino) and F. Scott Fitzgerald (pulling his little red wagon filled with liquor bottles). Woven through all of this is a sweetly tender story of Stein's relationship with her lover, Alice B. Toklas. Their courageous, openly gay marriage was even further ahead of its time than the artists they nurtured.

The five-member cast is exceptional. One of the reasons OTSL commissioned the work was to lure veteran mezzo-soprano Stephanie Blythe here to play Stein. Gordon's direct, unadorned tunes are perfectly conceived for Blythe's rich, clear voice. Her nuanced performance conveys both physically and vocally the crisp authority in the persona Stein showed the world while also evoking self-doubt and sensitivity in her private moments with her partner.

Elizabeth Futral plays Alice B. Toklas. Her lilting soprano dances brightly around Blythe's substantial mezzo, supporting, adorning and solidifying the sound, just as Toklas supported and adorned the work and life of Stein. Their cascading duets are the vocal highlights of the show.

The other thirteen roles in the opera are divided among Theo Lebow, Tobias Greenhalgh and Daniel Brevik. Baritone Lebow has fun as Fitzgerald, is a sensitive Picasso and, like the other two members of the supporting cast, fills in several minor characters as well. Bass-baritone Brevik counts a comically larger-than-life Hemingway and the frustrated and prattling Matisse among his roles. Greenhalgh, the baritone, portrays Man Ray and Gertrude's querulous, egotistical brother Leo among his handful of characters. The three also do a hilarious turn in drag as the artists' wives. Their range, acting skills and playfulness keep the illusion alive, resulting in some crafty and entertaining theater. Individually, in pairs, when combined as a trio and in quintets supporting the women leads, their singing is sensitive focused and seductive.

Director James Robinson's staging, like the music and plotting, is brisk and energetic. The show covers about 40 years in five acts and fewer than 90 minutes with no intermission, yet it's never rushed or busy. The pace and feel are enhanced by an elegantly simple, yet imaginative and flexible set designed by Allen Moyer. Lighting director James F. Ingalls and video and projection designer Greg Emetaz create all the necessary scenes and moods without a single set change.

The orchestra, members of the St. Louis Symphony conducted by Michael Christie, dances surefooted through Gordon's bright, straightforward score. The composer isn't trying to break any new ground here. He's telling a linear story with music that's comfortable enough to feel vaguely familiar. The music is original but not surprising. Likewise, Vavrek's libretto makes clever use of Stein's quirky relationship with the English language. A large percentage of the lyrics are straight from her many volumes of rhythmic prose and self-consciously repetitive poetry. The stuff actually works better when set to music than it did on the page.

In 2016 this trio of new operas concludes with one based on Salman Rushdie's novel Shalimar the Clown. If it's anywhere near the quality of Champion and 27, I can hardly wait to see it.