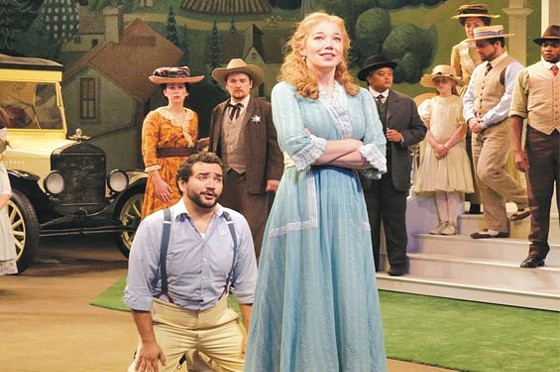 Think of it as an insurance policy: As Opera Theatre of St. Louis enters its ambitious 2014 season, with a world premiere of Ricky Ian Gordon and Royce Vavrek's 27 and an OTSL premiere of Francis Poulenc's spiritual and darkly sensuous Dialogues of the Carmelites, the company's frothy production of Gaetano Donizetti's beloved comedy, The Elixir of Love, stands as money in the bank, a delightful confection that leaves audiences beaming from overture to finale.

Written in a breathtaking few weeks of April 1832, Elixir was an immediate success. With its blend of Felice Romani's soulful libretto, its characters of real psychological depth, its poignant comedic moments, and a score that contains "Una furtiva lagrima" ("A Furtive Tear"), surely one of the most touching arias ever penned for the tenor, and Elixir soon became the most produced opera in Italy. Its popularity has endured, and Donizetti's tale of a poor worker who woos his well-born love interest remains one of the most oft-produced works in the operatic canon. Opera Theatre of St. Louis is something of an outlier in this regard: The company hasn't staged Elixir since 1982.

It was worth the wait.

The current production, originally created by James Robinson, is magnificent, transporting Elixir from the 19th-century Italian countryside to small-town America on the eve of World War I. Under Jose Maria Condemi's splendid direction, Nemorino, here fashioned as an ice-cream vendor, pines for Adina, a queen-bee landowner who makes sport of his infatuation, agreeing to wed the swaggering Sergeant Belcore to further torment the fawning Nemorino. Desperate to win her heart, Nemorino enlists the services of Dr. Dulcamara, an itinerant swindler who's hawking a tincture he claims will cure everything from corns to caducity. More to the point, he promises the potion, actually 80-proof white lightning from Kentucky, will make Adina fall in love with Nemorino. The scheme works, though not as intended, and Adina, realizing she may lose Nemorino as he prepares for war, finally declares her love.

Played against Allen Moyer's Grant Wood-inspired set -- with a bandstand, winsome ice-cream truck and a marvelous motorcycle with sidecar -- the real revelation here is René Barbera, a tenor who's clearly coming into his own. Barbera makes for a charming Nemorino, portly and puckish as he bounds about the stage, jumping on soapboxes and the aforementioned motorcycle to woo Adina. Not only is Barbera a fine actor, playing the role with both an impetuous desire for the woman he adores and a melancholy resignation at the impossibility of winning her highborn heart, but his supple voice brims with passion. His is a rich, powerful voice. It's capable of filling the Loretto-Hilton Center with the faintest whisper, and by the time he delivers the wonderful "Una furtiva lagrima," it's clear that -- elixir or no -- Adina, like the rest of us, has no choice in the matter: She is smitten.

Making her OTSL debut, soprano Susannah Biller brings terrific phrasing and a nuanced upper register to the role of Adina, a character she plays with fragile self-assurance, easily unmoored when Nemorino withholds his affections. Baritone Tim Mix sings with an earthy lyricism, playing for laughs in the role of the preening and cocksure Sergeant Belcore. For comic timing, however, Mix must share the prize with bass-baritone Patrick Carfizzi, whose Dr. Dulcamara struts about the stage in a purple pinstripe suit and a fright wig worthy of Christopher Lloyd in Back to the Future. A wonderful stage actor, Carfizzi at times seemed slightly outmatched in double arias and a bit winded in his otherwise terrific, funny and very athletic opening sales pitch. Another standout is Leela Subramaniam, a soprano who possesses a voice of remarkable clarity and richness in the role of Giannetta.

Boasting a terrific chorus and backed by the musicians of the St. Louis Symphony Orchestra (directed by OTSL music director Stephen Lord), OTSL's Elixir is the real thing -- the sort of musical tonic that, just as Dr. Dulcamara promises, will warm even the most jaded of hearts to the thrill of first love. Performed through June 25 at The Loretto-Hilton Center for the Performing Arts (130 Edgar Road). Tickets are $25 to $125. Call 314-961-0644 or visit www.opera-stl.org.