Faring Purth's mural Prime sprawls across the south-facing wall of the Nebula Coworking building at the corner of Cherokee Street and Jefferson Avenue, but apparently its new neighbor, Family Dollar, threw a fit over an early version of the work.

The problem? Just a little hint of nipple.

"Family Dollar does not approve of the paintings being applied to the side of our leased premises," reads an e-mail sent to Jason Deem on February 19. Deem commissioned the mural, and his company, South Side Spaces, owns the Nebula building and leases space to Family Dollar. He provided Daily RFT with a copy of his tenant's hot-and-bothered missive that declared the mural "offensive."

"It is offensive," the e-mail continues, "and does not reflect positively on the type of business we operate. Therefore, we are putting Landlord on notice of our position and reserve all rights afforded to us under the terms of the lease." 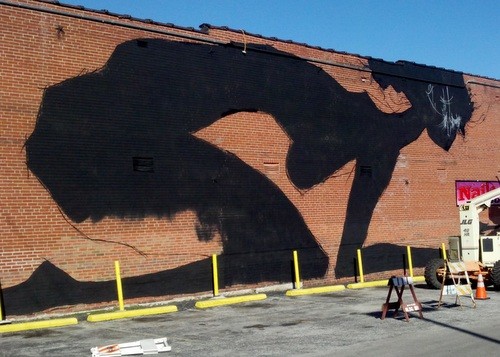 Purth generally avoids getting involving in controversies around her own work, but she sounded off this week on the Brooklyn-based arts blog Brooklyn Street Art. There, she writes that Family Dollar threatened legal action over her work, claiming the almost-nipple was deterring customers.

Daily RFT spoke to a Family Dollar spokeswoman about the e-mail, but she said she wasn't familiar with the situation and declined to comment further.

"As the piece progressed, the nudity was partially covered and additional detail was added," Deem recalls. "Family Dollar felt that their concerns were addressed. Overall, Family Dollar was flexible and reasonable to work with through the process."

But this wasn't the only time the early stage of Prime -- a black outline of a kneeling woman -- raised hackles among its Cherokee neighbors. While Family Dollar kvetched over the nipple, two local artists looked at the black female figure and perceived racist and sexist overtones. Both artists later offered retractions and apologies, and as Purth added to Prime, the rough outline became a work of intricate, melancholy grandeur.

But then city of St. Louis took its own turn: Two weeks ago, Deem received a notice from the City Building Division. It said the mural violated city code.

The error, he says, came from a "relatively new" inspector who may have been confused by the mural's proximity on the wall to actual advertisements for a nail salon and rental center.

"The inspector in that area received a citizen's service bureau complaint, and he originally sent out a violation letter telling them to get a permit," says Oswald. Apparently, the inspector thought Prime was an advertisement of some kind.

"His supervisor realized that there was not any advertising or endorsing of a company, which actually throws it into classification as public art. So we just abated the letter of violation."

Despite a few knee-jerk overreactions and a city inspector's minor blundering, the mural has gained wide acceptance in the Cherokee community, says Cara Spencer, who runs the Nebula Coworking Space.

"As it was being built and unfolded, I received a considerable amount of feedback. A lot of overwhelmingly positive feedback but also a lot of negative feedback as well, from churches and neighbors," says Spencer.

"What was really really interesting," she reflects, "was the moment it was finished, the barrage of communication didn't stop, but the negative communication stopped entirely."

Though Prime has endured more than her fare share of unwarranted criticism, this is still a step up for the Cherokee neighborhood and its evolving relationship to its street art. By comparison, in 2006 the vice president of the Cherokee Station Business Association tore down a Cherokee Street mural with her bare hands.

"This type of art is something that's still very new to people, and people didn't know what to expect," muses Spencer. "But at the end of the day, Prime is a really lovely piece. I think people really came around the final product."