As video-on-demand continues to become the preferred route of distribution for a certain kind of independent film, much is being made of Nicolas Cage's willingness to slum for a paycheck, with recent examples including already-forgotten, small-screen-friendly items like Seeking Justice, Trespass, Stolen, and The Frozen Ground. (His character names in these projects -- Will Gerard, Kyle Miller, Will Montgomery, and Jack Halcombe -- are as interchangeable as the titles of the films.) Aside from citing the obvious appeal of doing work for money (a defense Cage himself brought up in a recent interview with The Guardian), it's also possible to back Cage by acknowledging the consistency with which he's taken on "serious" roles over the years.

David Gordon Green's Joe, which hits limited release this weekend (more details on that here), marks the latest instance of this trend, with Cage giving a reportedly subdued performance as an ex-con named Joe Ransom. In that spirit, we've put together a rundown of some of the actor's finest performances, all of which serve as proof that, though his over-the-top inclinations may make for a side-splitting YouTube compilation, Cage has amassed a career that few contemporary actors can equal. This list is hardly airtight in its exclusivity, so a few honorable mentions ought to go out to a pair of Cage's deliriously uneven auteur collaborations (David Lynch's Wild at Heart, Brian De Palma's Snake Eyes), 1983's Valley Girl, 1987's Moonstruck, and Alex Proyas's Knowing (a favorite of the late Roger Ebert). 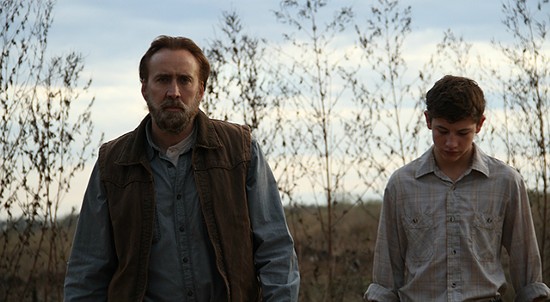 With these three Francis Ford Coppola films, Cage, a nephew of the famed Godfather director (he adopted a different last name to dodge accusations of nepotism), was given a prominent entryway into the industry, starting with supporting roles in Rumble Fish and Cotton Club and building to his bizarrely-voiced Peggy Sue performance that drove co-star Kathleen Turner mad.

Cage's only collaboration with Joel and Ethan Coen has remained one of the brothers' most well-liked films, a charmingly kooky response to their dead-serious 1984 feature debut, Blood Simple. In a recent appreciation of the Coens' oeuvre, Mike D'Angelo laments the fact that Cage and the Coens haven't re-teamed in the years since: "The Coens have never made another movie with Cage, which seems criminal, given how perfectly his recklessness meshes with their control-freak exactitude." 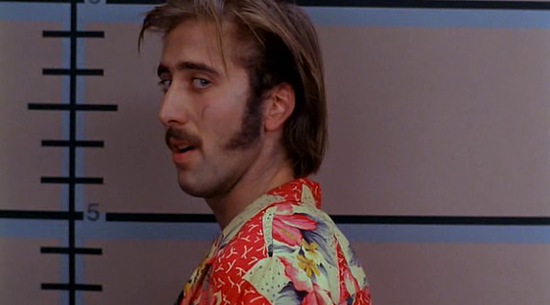 The performance that earned Cage a Best Actor Oscar, this is the closest thing on the list to an obligatory entry. However, though the self-loathing-alcoholic/well-meaning-hooker set-up is rather problematic -- Jonathan Rosenbaum aptly, if harshly, describes it as "[i]n keeping with the prevailing designer-vomit Hollywood style of glamorous despair" -- there's nothing flimsy about Cage's raw work in the film.

Cage's action-movie streak hit something of a peak with this miraculous run in the mid-'90s, which had the actor collaborating with genre stalwarts Michael Bay, Simon West (with producer Jerry Bruckheimer), and John Woo, respectively. Here's hoping the present-day Cage soon ditches the realm of sub-VOD actioners and returns to working with bona fide craftsmen.

Director Martin Scorsese and screenwriter Paul Schrader reunited for this under-appreciated gem, which, featuring one of Cage's most demanding roles, finds the actor channeling both the New York despair of Taxi Driver's Travis Bickle (Cage's character is an ambulance paramedic) and the crazed nocturnal anxiety of After Hours's Paul Hackett.

5 more of Nicolas Cage's finest performances are on the next page.

This second Spike Jonze-Charlie Kaufman collaboration (after Being John Malkovich) presents Cage in a challenging dual-role performance. Writing in the Voice in 2002, J. Hoberman noted that "[t]he perfectly seamless presence of the two Cages on-screen has the uncanny effect of neutralizing the actor's naturally obstreperous affect."

One of the fleetest films directed by Ridley Scott, this comedy-thriller positions Cage as a con-man with obsessive-compulsive tendencies. Writing in the Voice in 2003, J. Hoberman praised the actor's dynamic work: "Artful distraction is the key to a successful con, and Cage does more than that for Matchstick Men, dazzling the viewer with a veritable ob-com sonata based on a plethora of tics, hitches, stutters, twitches, and obscure rituals."

Gattaca writer-director Andrew Niccol's detailed look into the world of arms dealing was a kind of passion project for Cage, who's credited as a producer. In an interview he gave at the time of release, Niccol said, "I don't write with anyone in mind, but as soon as I finished I thought, 'Who can make the devil charming?' It's Nicolas Cage."

Cage is known for big performances; director Gore Verbinski (The Lone Ranger, the Pirates of the Caribbean franchise) is known for big movies. They both restrained themselves -- to satisfying effect -- in this somber, Chicago-set drama, which the Voice's Michael Atkinson championed in 2005 as "the most supremely odd American film of the year." 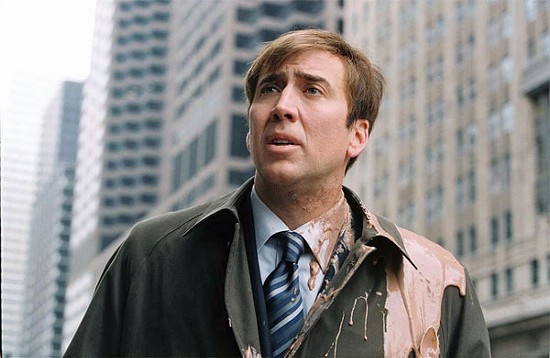 This may end up being the most ridiculously perfect role Cage ever takes on: after all, a Werner Herzog remake of an Abel Ferrara film doesn't come along all that often. If the movie itself doesn't live up to every expectation, the performance is so overblown that it can't be dismissed: it plays like a greatest-hits reel of Cage's potential for hysteria.