The Code of the Hills: HarperCollins Picks Up Legal Thriller From Missouri Prof 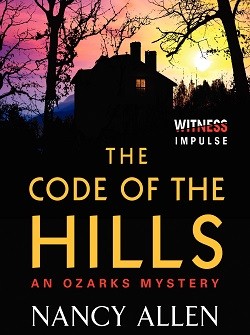 The first thing one notices about Nancy Allen is her Missouri twang.

"My mother had a very pronounced Ozark accent, and I'm told I sound like her," says Allen. "I am stubbornly and defiantly Ozarkian."

Yet as proud as she is of her Southern Missouri heritage (Allen traces her family's Show-Me-State roots back to the 1850s), she's no apologist for the region's shortcomings.

"Just because I'm a card-carrying Ozarkian does not mean I'm blind to the way the Ozark hills need to be improved," adds the 57-year-old attorney and mother. It's that statement that may best summarize the theme of Allen's first-ever novel -- the one HarperCollins scooped up earlier this year with a sequel already in the works.

Allen's The Code of the Hills tells the story of Elsie Arnold, a female prosecutor in the fictional town of Barton, Missouri, who's been assigned an incest case involving a wannabe meth dealer accused of raping his three daughters. Given the charges, one might think that the court of public opinion would at least be in Elsie's favor. But this is the modern-day Ozarks, where a bigoted religious group (not unlike the Westboro Baptist Church) comes to the aid of the accused, women in power are not to be trusted (much less respected), and most residents would rather deal with matters on their own terms without the intrusion of law or government. That latter subplot provides the book's title.

"My mother would talk about 'the code of the hills,'" Allen tells Daily RFT. "Essentially it's this self-sufficient, and suspicious, hillbilly sentiment that a man gets to rule his land and family as he sees fit, and no one is to question that."

Allen won't call The Code of the Hills autobiographical, though she acknowledges that she drew on her own experiences in creating the book's protagonist. Like Elsie, Allen moved back to her hometown in the Ozarks (Springfield) after graduating from Mizzou law school and took a job as the only female attorney in the county prosecutor's office. And like Elsie, Allen often worked the cases no one else wanted -- the sex crimes.

"As the only female on staff, they were like, 'Here you handle these,'" recalls Allen. "I cut my teeth on incest because we have a lot of that in the Ozarks. Greene County has the highest rate of child sexual abuse in the state of Missouri. While I was handling those terrible, terrible cases, I thought, 'I should write a book about this.' Thirty years later I finally did."

While The Code of the Hills is very much a legal page-turner, it's also something of a case study on Southern Missouri -- think John Grisham meets Daniel Woodrell -- as Allen touches on the racism, poverty and sexism that are as much a part of the Ozarks as its rocky terrain. Her Elsie flies in the face of these local conventions. She's educated and financially stable. Her best friend is one of the county's few blacks. And she's a staunch feminist. Yet she's also conflicted -- concerned about her body image and in a physically abusive relationship.

"It was important to me that Elsie be flawed," says Allen. "I think too many female characters in legal thrillers are these stereotypical good girls. To me, that's just not interesting."

Allen, who now serves on the law faculty in the College of Business at Missouri State University, wrote The Code of the Hills in longhand in the pre-dawn hours before classes. It took her six months to complete the manuscript and four additional years of re-writes and battles with New York book agents before finally landing a contract with Witness Impulse, an imprint of HarperCollins. The book deal came together after she signed on with her current agent, Jill Marr, of the California-based Sandra Dijkstra Literary Agency, perhaps best known for representing Amy Tan.

"They get me at Sandra Dijkstra," says Allen. "As you might imagine, there are a great many people in New York City who aren't interested in talking to woman from Springfield, Missouri, with no connection or experience in the publishing world. You have to be immune to discouragement."

Allen declined to discuss financial terms of her book deal, though she notes that it is structured to pay more from royalties than through an advance. And whatever that amount is, it's not enough -- yet -- to quit her day job.

"I'm not doing this for the money. It's just something I've always wanted to do," says Allen who's hardly had a moment to soak it all in. The publisher wants a sequel manuscript by July.

The Code of the Hills comes out as an ebook on April 13 and a paperback on May 20.