That Bible miniseries, originally aired on the History Channel, won notoriety by casting an actor who resembles Barack Obama in the crowd-pleasing role of Satan. The producers -- Roma Downey, who plays Mary here, and Mark Burnett, who pioneered the watch-skinny-people-suffer genre with Survivor -- insisted that this was a coincidence, despite the fact that they had aggressively targeted the series to the likes of Glenn Beck. America, then, is wondering: Does this theatrical sequel feed more chum to the Tea Party? Or is it, as a product of what Tea Partiers insist is a liberal Hollywood, chock-full of liberal propaganda? Both sides may have a case.

See also: Son of God is a Chintzy Melodrama About the Horrors of Capital Punishment

Evidence that Son of God is chum for the Tea Party

• Many scenes about how awful taxes are.

• Much talk early on about how dissenting voices in an imperial culture get crushed.

• A skeptical Jew warns that the anti-sin preaching of Jesus might be bad for the "community" the Jews have built.

• Pilate and his wife gorge on fruit while the people starve; Michelle Obama likes fruit.

• The Romans bar the followers of Jesus from voting on which of three condemned men will be freed, which is kind of like what that one Black Panther guy pulled at that polling place.

• The followers of Jesus mob the stairway and entrance into the temple in Jerusalem, which looks suspiciously like the Lincoln Memorial, where Glenn Beck once gave a speech to a bunch of angry white people on Martin Luther King Day.

Find evidence that Son of God is liberal blasphemy on the next page. 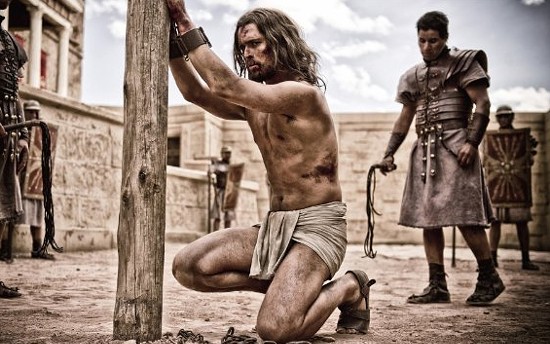 Evidence that Son of God is liberal blasphemy

• At that temple that suggests the Lincoln Memorial, Jesus denounces "lofty" public prayers and the showboating of professional holy men, so eat that, Glenn Beck.

• Jesus promises to "change the world."

• Handing out loaves and fishes looks a lot like entitlement culture.

• All the most tough-minded teachings of Jesus -- like the bit about thinking about sex being just as bad as committing adultery -- occur discreetly off-camera.

• The filmmakers neglect to show Jesus writing the U.S. constitution and weeping over the tragedy of bakery owners forced to whip up cakes for gay weddings.

Hey, you could do worse than following @studiesincrap on the Twitter thing.