A mission to recover a 15th-century sculpture stolen by the Nazis, a West German spy placed undercover as an economics student, and an entire building that just...disappeared. Plot elements of the latest big budget spy thriller, right? Wrong.

You don't need to go to the movies or fire up Netflix to get your fix of Cold War-era international intrigue. These true stories, too strange to be fiction, find new life in German artists Renata Sith and Frieder Schnock's new exhibition at the Saint Louis Art Museum.

As is the case with St. Louis itself, there's a pervasive German presence at the Saint Louis Art Museum. From the nightmarish truculence of Max Beckmann's muscular figures, to the placid elegance of Gerhard Richter's large-scale abstract works, the museum has one of the most extensive collections of postwar German art in America. Stih and Schnock draw heavily on this shared heritage in their multimedia exhibition Currents 107: The German Connection -- Raft With Stranded Objects. And although their aim is partially to entertain us, the artists' broader goal is to point out deeper connections between people that transcend time and space.

"It has a lot to do with us, our life here," Stih says of the artwork. "But it also has to do a lot with the history and people who came to this country, which we find so interesting. It's always interesting following their steps."

The centerpiece of the show is a twelve foot-high mural containing three overlaid depictions of the Reichstag, the German Parliament building, coated with graffiti-style phrases relating to various aspects of German history. The inspiration for this piece comes from a massive room-size model of the Reichstag, shipped to Chicago for the 1893 World's Columbian Exposition. Eventually, the model made its way to Saint Louis Art Museum where it was somehow misplaced -- gone without a trace. Stih & Schnock embrace the mystery, leaving us to ponder what sort of political machinations and institutional wrangling could lead to such an improbable oversight. 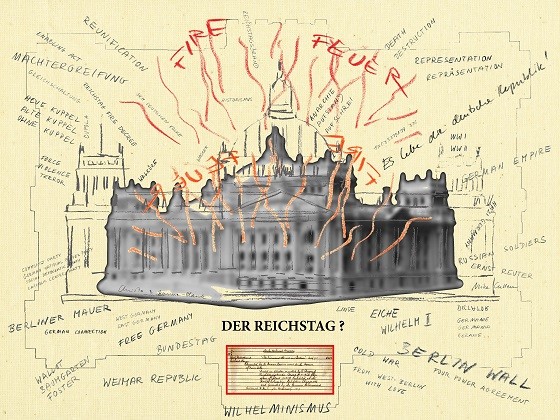 For the most part, the potentially dour subject of postwar German identity is tempered by a dry wit and a tongue-in-cheek approach. A banner hanging in the north balcony of the museum shouts "We Like America And America Likes Us," a statement of collective self-affirmation that references the title of a performance by fellow German Joseph Beuys. In Beuys' piece, an archival video of his 1974 performance also on display in the museum, the artist travels to a gallery in an ambulance, and then spends eight hours locked in a room with a wild coyote.

With a conceptual approach that largely downplays visual pleasure, Stih & Schnock conduct a balancing act on a tightrope, with more than a few pratfalls. When they are successful, we are provided with a fresh, humorous perspective on pieces in the museum's collection, and on German-American interconnectedness. When they are not, the result is either a didactic lesson on German history, or a collection of self-satisfied art historical references that few will appreciate. Even the misses have entertainment value though, and no screenwriter would make this stuff up. The German Connection has the market cornered on a unique brand of historical spectacle.