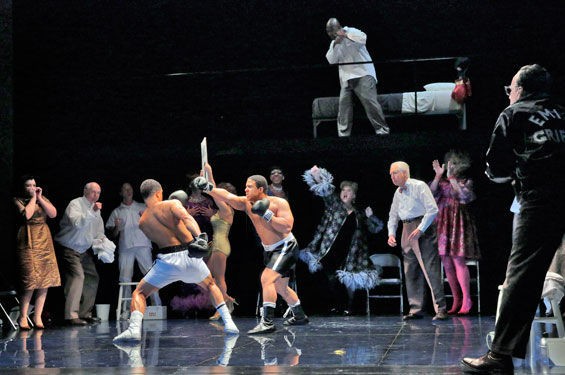 The Opera Theatre of Saint Louis concluded the celebrated first run of Champion a little more than a month ago. The opera is based on the life of the just-departed Hall of Fame Boxer Emile Griffith, who passed away in a Long Island nursing home on July 23. Griffith and Champion are also subjects of RFT's cover story this week.

The fight was in Madison Square Garden on March 24, 1962. During the weigh-in, Benny Paret called Griffith a "faggot" in Spanish. There were persistent rumors that Griffith was bisexual (the rumors were true). But for the first eleven rounds it seemed like a tame -- even boring -- welterweight championship match between the two men. But there was nothing boring about the twelfth round.

Griffith and Paret had split their last two matches, with Griffith first taking the championship belt in the first and losing it the next time they met. In the 1962 fight, Griffith was a challenger.

The twelfth round ended with Paret unconscious on the mat and dead ten days later.

Paret probably shouldn't have even been in the fight after having taken a truly awful loss only a few months before. He had apparently complained of headaches before the 1962 fight, but went on anyway. Paret left behind a wife and son.

You can see the videos on the next page. If you're inclined, you can also watch the entire hour-long fight.

Note: The video isn't gory or "graphic," but it is brutally violent. Just as the announcer drolly remarks, "This is probably the tamest round of the entire fight," Griffith delivers a hammering right-hand blow to Paret's face, backing him further into the corner.

In the next eighteen seconds Griffith hits Paret around 25 times. It's the body shots that are hardest to watch, when Griffith is actually holding Paret's body as he punches into the slumping boxer's torso over and over.

This clip shows the final deciding seconds of the fight and the immediate aftermath.

This is the entire fight: