Close your eyes for a moment and picture the snobbiest art critic possible. Got it? Good. Now somehow make that person ten times douchier than you imagined, and you still won't arrive at anyone quite as pretentious as Michael Wilson.

A freelance art critic from New York, Wilson hires himself out -- according to his website -- for "appropriate writing and editing projects." And last month Wilson must have thought he landed just such an assignment when the St. Louis Convention and Visitors Commission paid to bring him to town to witness the city's art scene and the unveiling of the new wing of the Saint Louis Art Museum.

The trip, Wilson will have you know, disappointed.

"Ah, the regional junket," Wilson merrily begins his review of St. Louis art and culture for Artforum magazine. "The prospect -- free room and board for a couple of nights in a novel location, a spot of local sightseeing (art-world and otherwise), an exhibition or opening or event devoid of the usual suspects -- is always so appealing. And yet..."

So, what are Wilson's complaints about his free trip ($317 in airfare and $218 in hotel expenses) courtesy of the tax-supported CVC? We've boiled them down to the following six gripes: 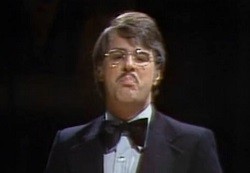 Wilson's initial flight to St. Louis got canceled because of thunderstorms, which totally "scuppered" his privilege of being wined and dined. He writes:

"A tidy plan to leave New York just before Friday teatime and arrive in Saint Louis for early evening cocktails at Laumeier Sculpture Park was scuppered by wild weather that necessitated a later departure and a frantic transfer in Dallas. Landing closer to midnight, I found my driver, headed for the hotel, checked in, and checked out."

2. The Cheshire will not do for Michael Wilson.

So, what did Wilson think of The Cheshire, where the CVC paid $109 per night to house him for two days?

Not much. In his review for Artforum, he faults the hotel for the tiniest of grammatical errors found in its brochure and suggests the newly remodeled lodge is slightly better than a flophouse. He writes:

"Dodgy grammar and ill-advised nomenclature notwithstanding, the mock-Tudor facility had apparently been designated officially historic, a reward for having survived unnumbered stag parties and family getaways since as far back as the mid-1950s."

OK, well, surely his trip will get better, right?

Continue for Wilson's thoughts regarding other St. Louis institutions. Spoiler alert: He is not impressed.

3. The Contemporary Art Museum is redundant. 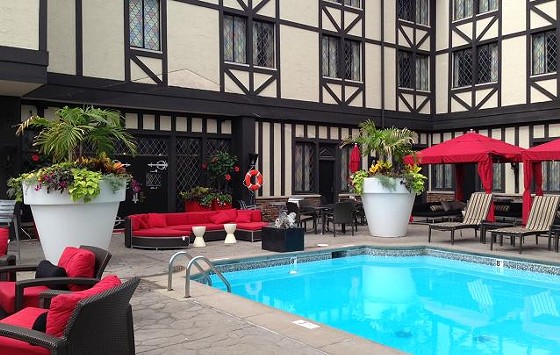 "Postvisit [sic], there was a feeling among my colleagues that the place lacked a convincing raison d'être--perhaps because many of them had already toured "SLAM" (so emphatic!) and failed to see the need for another, smaller, museum--but I enjoyed the shows and the chat."

See also: - 25 Reasons to Love St. Louis in the Summer - Flyover This: Should St. Louis Shell Out to Ship in Writers for SLAM?

After touring CAM and the adjacent Pulitzer Foundation for the Arts, organizers of the media "junket" took Wilson and his colleagues to see the Missouri Botanical Garden. Big mistake. Wilson writes for Arftforum:

"From here on out, the expedition veered off the contemporary-art-and-architecture track in some frankly oddball directions. An outdoor lunch in blistering heat in the Islamic Garden at the Missouri Botanical Garden (because why not, I suppose), hosted by no-nonsense communications guru Peggy Lents, was followed by a tour of the premises and their admittedly imposing Climatron (there's a Sleeper joke in there somewhere)."

Continue for Wilson's take on the Chess Hall of Fame and more.

5. The Chess Hall of Fame? Pathetic!

"As a later powwow confirmed, my colleagues and I were all, by this point, wondering why we were here. The institution, for all its reported popularity, had a subtle air of desperation that made me pity and slightly fear its staff; perhaps they too were wondering how they'd ended up doing what they were doing."

6. Saint Louis Art Museum: Where are the celebrities?

Had Wilson's flight to St. Louis not been canceled, he would have had the chance to view Saint Louis Art Museum and its new, David Chipperfield-designed wing on Friday night. Instead, it wasn't until Saturday that he finally got a chance to see the $160 million expansion. So what did the art critic think? Who knows. Wilson only writes of his disappointment in not being able to rub elbows with the art-world celebs who toured the facility before him. Writes Wilson:

"We made it [to the Saint Louis Art Museum] by nineish, only to find the place close to empty, the stars having mostly, it seemed, moved on. Pounding our drinks in the Grand Central-esque lobby, we went our separate ways -- I got a great personal tour of the understated new galleries from curator Tricia Paik but saw no one else; others of our party at least clocked High Museum of Art director Michael Shapiro, Museum of Modern Art curator Ann Temkin, Brooklyn Museum curator Elizabeth "Buffy" Easton, and New York dealer Craig F. Starr. Chipperfield, reportedly a grumpy sort given to moaning about American construction workers' lack of craftsmanship, was nowhere to be seen. But hey, we saw Isaac Mizrahi at the airport the next morning. He was wearing sparkly blue nail polish."

And that is how Wilson's article ends. But perhaps there could be a happier ending? The CVC tells Daily RFT that it would love to pay for Wilson to return to St. Louis!

"He was in a bad mood. It can happen to anybody," says Donna Andrews, spokeswoman for the CVC, which funded Wilson's trip last month but did not plan the itinerary of his tour. (Saint Louis Art Museum is to blame for that.) "We will extend him an invitation to come back to St. Louis," says Andrews. "He left with a bad impression. We can change that."

For what it's worth, last month RFT art critic Jessica Baran predicted that St. Louis had little to gain in shipping in out-of-town writers to review the new wing of SLAM. Read her commentary: Flyover This!