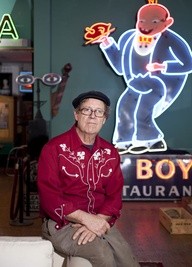 Joe's Cafe -- a private club and concert space in the Skinker-Debaliviere neighborhood -- was cited by the Excise Division during a show Thursday night on the charge that it lacked the proper permits.

Located at 6014 Kingsbury Avenue, the venue sits right next to an art gallery, both run by the well-respected local artist Bill Christman, who's known (among other things) for his collaboration with the late Bob Casilly and for creating the City Museum's Museum of Mirth, Mystery and Mayhem.

According to a copy of the citation obtained by Daily RFT, a liquor control officer came in at 10:20 pm and cited Christman for permitting consumption of liquor without a license.

This all went down in the middle of a concert by Farshid Etniko (a musician whose style is so eclectically international, it's just about impossible to describe in brief).

Today, Excise Commissioner Bob Kraiberg told Daily RFT that he believes the agent showed up in response to a complaint.

It's known among club members -- who must be 30 years old and up -- that when you go to Joe's to catch some tunes, you pay a small cover (such as $5), which goes straight to the musician. As for drinking, it's a BYOB system.

However, Kraiberg says that such a modus operandi requires a consumption license, which the cafe did not have.

"If you have a party in your backyard, and you give beer away, no license is required," Kraiberg explains. "But anytime you take money for a drink and call it a donation or a ticket or whatever, that's considered a sale because person who buys is expecting to be able to consume alcohol." Kraibeg adds it doesn't matter, in that scenario, who brings in the liquor.

Christman did not immediately return a call for comment. His hearing is on January 29 in Division 4 at 1 pm.

In 2007, Riverfront Times named Joe's Cafe the "Best Kept Secret" in the city.

Update: Christman's publicist just e-mailed us to say, "Bill doesn't yet know if he's going to suspend operations until the license comes through, or forbid alcohol consumption and still have music. But the show will definitely go on, one way or another."

Arts See You in Court!