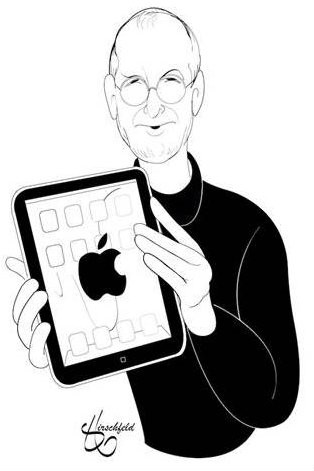 Tonight at the U-City Library, an exhibit of black and white cartoon drawings entitled "Next in Line" will have its opening reception. The artist, St. Louis native Matt Hirschfeld, currently lives in Los Andeles but will be on hand to talk about the work.

But there's a very good chance he'll be fielding one question over and over again. Is he really related to Al Hirschfeld?

The answer is more complicated than you might think.

Al Hirschfeld was born in St. Louis in 1903 and rose to prominence for his incredibly unique, stylized caricatures of Broadway stars, politicians and authors, drawn for the New York Times. Most people, whether they know it or not, have at one time seen a Hirschfeld comic and his work is on permanent display in New York City at the Metropolitan Museum of Art and the Museum of Modern Art. He died in 2003 at 99 years old.

Matt Hirschfeld was also born here in St. Louis and according to a piece in the New York Times, was told by his mother that he is related to the iconic artist. His style is clearly similar, though he uses computer illustration instead of pen and ink, and the title of his show and website seem to be playing off the idea that he is a blood relative.

But as the NYT piece says, that's not sitting well with Hirschfeld's closest friends and relatives back in New York City.

Matt says that his paternal grandfather, Richard Hirschfeld, was a cousin of Al Hirschfeld. That would make Al Matt's second cousin twice removed.

"Al had no problem with this kid, it was only the mother's claim that they were related," Ms. Feiden said. "He used to call them 'these meshuganah people who keep insisting they're related to me.' " Al's widow and the archivist of his foundation both said they did not know of any evidence that settled the claim of a blood tie.

Matt said the only shred of proof he had of being related to Al was an immigration document of his great-grandfather's stating that his destination was Sarah Street in St. Louis, which was an early address of Al's.

It's a fascinating little piece of art world controversy, though Matt does not seem overly adamant about his relation to Al -- he merely says it's what he's been told and he believes it.

Here's a sample of some of the work that's up right now at the library. The reception begins tonight at 5 p.m., event details are here. Below, check out an interview Matt Hirschfeld did with Fox 2.