Another Huge Mural on Cherokee, But This Time, No Backlash

July 16, 2012 at 9:00 AM
comment
Over the weekend, Chicago-based artist Ruben Aguirre completed the second half of this huge mural at Cherokee Street and Texas Avenue: 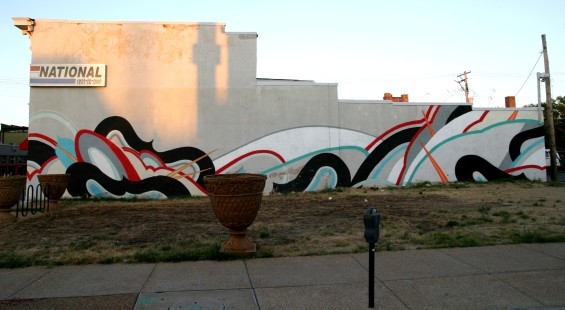 Like the El Leñador mural eight blocks to the west, this one has gone up with the building owner's permission, and was facilitated by Jenn Carter and Bryan Walsh of Aisle 1 Gallery -- only this time without controversy, those two say. Daily RFT asked why.
"Why is this art, but [El Lenador] is graffiti?" asks Carter rhetorically. "The lines are very blurry."
In a sense, Aguirre's mural is evidence of how far the neighborhood has come. After all, this is the exact same wall where a local artist put up a mural back in 2006, only to be dramatically torn down during a rainstorm by Shirley Wallace, a local business owner and then-vice president of the Cherokee Station Business Association (see our coverage here).
As for Aguirre's mural, he started it back in November. Walsh says he came back to St. Louis over the weekend for his gallery showing at Aisle 1, which will run into August. When the artist returns next month to retrieve his unsold work, he'll put the finishing touches on the mural -- a piece that Walsh says he's doing simply "for the love."
"For people in the neighborhood and people driving by, it provides a sense of place," says Walsh. "It's no longer just 'the National Rent-to-Own building.' Now it's 'the empty lot with the mural.'"
Of course, the more murals that pop up on Cherokee, the more specific you'll have to be about that.
Here's a time-lapse video of Aguirre doing the first half of his piece: