The Fringe is Near: Arts Festival Needs Your Help 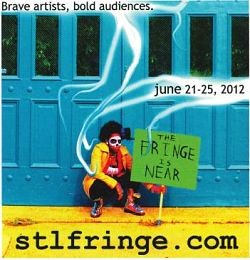 In 24 days, the first St. Lou Fringe Festival will take over Midtown.

And what is a fringe festival, you ask? The short answer: It's a performing arts festival comprised of 30 local and national acts -- singers, dancers, actors, acrobats -- that will go on for four days in four venues, all on Locust Street between Grand Boulevard and Garrison Avenue.

But it's also more than that. Says Em Piro, the festival's chief organizer and mastermind, "We want this to be more than a performing arts festival. We want it to be a celebration of local culture."

St. Louis culture, Piro explains, is energetic. It encourages audience participation. It has a fair amount of DIY: You want a fringe festival? Well, go ahead and start one. (The June 21 issue of Riverfront Times will explain how, exactly, this is done.)

The problem is, fringe festivals, like everything else, cost money, even if they run on volunteer labor and in donated space.

Earlier this month, St. Lou Fringe launched a Kickstarter campaign to raise $5,000 to round out its budget for this year's festival -- which, Piro assures us, will be the first of many. The campaign ends on Thursday, May 31, at midnight. At this writing, Piro is still nearly $1,000 short of her goal.

The show will go on. It's come too far not to. But the extra Kickstarter money would be extra insurance that the festival will run smoothly, that the venues will have adequate light and sound equipment and that there's sufficient transportation so the festival is accessible to everyone.

Then get out your credit card and give a few bucks to get this endeavor off the ground and celebrate your city and its artists.