Oh, that we were in Jefferson City right now, under the capitol dome, on the House floor where, at this very minute, legislators are proudly unveiling the latest statue to grace the Hall of Famous Missourians: the long-awaited (by somebody, probably) bust of Rush Limbaugh.

But wait! It looks as though this was a private ceremony, albeit one on government property, and in order to go, one had to be invited. And also one that was held three hours before the legislature was scheduled to convene.

Fortunately, through the magic of Twitter -- and, by the way, when does Jack Dorsey get his bust, huh? -- we were able to follow the ceremony through the eyes and iPhones of St. Louis Public Radio's Marshall Griffin, the Post-Dispatch's Virginia Young, the Kansas City Star's Jason Hancock, Progress Missouri's Sean Nicholson and FiredUp!Missouri.

There was a velvet rope: 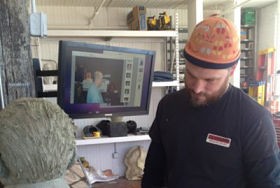 Somebody probably deemed it necessary, since the man was there, in the flesh as well as the bronze.

But it was an overwhelmingly friendly crowd. Friendly in the sense of "friends lie to make you feel better about yourself."

According to several Tweeters, Rush graciously accepted the praise and humbly noted that his "friends on the other side of the aisle are deranged." Well, at least he called them his "friends."

There was a cloak-and-dagger element to the entire affair, not only because it was invite-only and outside normal legislature hours, but also because of the lack of advance publicity. Nobody seemed to know it was happening until it was, you know, happening. Even the bust was hidden under a mysterious black drape.

It was hard to tell from Rush's expression whether he was pleased with the likeness.

(That's Missouri Speaker of the House Steven Tilley, who also happens to be the instigator of this whole statue business, on the bust's other side.)

One Tweeter, LOLislators, observed that the bust appeared to have man-boobs. It could have been the result of stress on the part of the sculptor, E. Spencer Schubert; Virginia Young of the Post-Dispatch reports that he received 700 discouraging e-mails once word got out that he was at work on the Rush bust.

Meanwhile, House Democrats are pissed that they weren't invited to the party. House Minority Leader Mike Talboy (D-Kansas City) has sent a memo to the Office of Administration, which controls all the public areas of the Capitol, requesting that the Limbaugh bust be excluded from the Hall of Famous Missourians.

Where would the statue go then? It seems such a waste of Schubert's work and all the money that paid for it, money that was painstakingly raised by Tilley during a golf outing. Perhaps it could go in Tilley's office, where he can gaze on it admiringly?

In the meantime, fight on, ye legislators of Missouri!