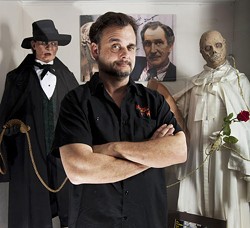 Stockman's hard work has earned him not one but two Rondos, the prestigious awards granted by the Classic Horror Film Board; think of them as the Oscars of the horror genre in all media. Vincennial won for "Best Fan Event," and Stockman picked up the "Monster Kid of the Year" statue to boot. If you're wondering, "Why are they called the 'Rondos?,'" you must not be a classic horror film fan; the Rondo is question is character actor Rondo Hatton, whose distinctly rugged visage earned him roles as the heavy in a score of films.

DailyRFT: Congratulations on your wins, Tom. Did you know you were in the running?
Tom Stockman: I knew Vincentennial had been nominated for "Best Fan Event" and had been campaigning for its win, mostly on Facebook. The "Monster Kid of the Year" award was totally unexpected. It's a write-in award, there were no nominations. With 3,100 people voting, I never thought I would have a chance of winning and hadn't given it much thought. But apparently man who attended the events here were campaigning for me behind the scenes.

Is there an awards ceremony?
Yes, they're presented at the Wonderfest Hobby Expo in May in Louisville, Kentucky.

Stockman is the second St. Louisan to win the Monster Kid of the Year award, which are known as "the Rondo program's highest honor." Raymond Castile received the 2006 award for the Universal Monster Army, his traveling exhibit of '60s monster toys.