What the Dickens?! For Kids! 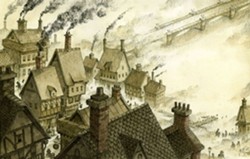 John Hendrix makes a living creating illustrations and covers for periodicals such as the New York Times and Rolling Stone. It's a difficult field to break into, and it's just as difficult to maintain one's standing because you have to keep producing at a steady rate. "Sometimes you get a call at 10 a.m. and you have to have the piece in by 4 p.m. the same day," he explains. "It's the extreme sport of illustration. I take on too much sometimes because I love to do it."

To counter the rapid turnaround times of his day job, the St. Louis-based Hendrix illustrates children's books, a process that can take the better part of a year. Some of them, such as his book about the firebrand abolitionist John Brown, he also writes. His most recently published book, A Boy Called Dickens, is a work of historical fiction that was written by Deborah Hopkinson. This collaboration opens a window on the childhood of currently en vogue author Charles Dickens, which happened to be full of hardship, toil and a family stint in debtor's prison -- clearly the stuff of children's bedtime stories. Wait, what? Why make a children's books out of Dickens' Dickensian childhood?

"A certain level of suffering is necessary for my children's books, and Dickens' life has it," Hendrix says. He is not wrong.

February 7, 2012, marks the bicentennial of Charles Dickens' birth, an event that has sparked a resurgence of interest in the author's work and life, a fact Hendrix  happily acknowledges -- "I'm calling it Dickenspalooza," he says with a smile -- particularly because of Dickens' prominent role in his own life. "I hated to read in high school. I feel bad saying that. But David Copperfield was the book that changed that. The characters are so clearly defined, so memorable."

It's those sharply-limned characters that lead Hendrix to believe that Dickens' appeal is universal, regardless of a reader's age. "The Wall Street Journal reviewed (our book) and criticized us mildly for introducing kids to a character they won't really encounter again until high school. Because a kid can't read Dickens on their own before they get to high school?" 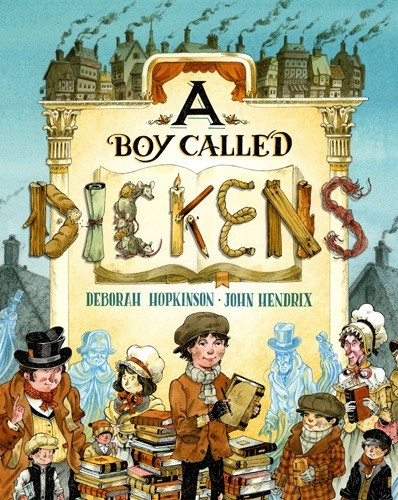 Certainly most children who pick up A Boy Called Dickens will be entranced by Hendrix's grimy, ominous version of 19th century London with its towering chimney stacks and pervasive smoke. The suffering Dickens endures will also seem familiar to any child conversant with Harry Potter's pre-Hogwarts life. The book deals honestly with the horrors of a twelve-year old child having to work in rat-infested factory in order to earn survive, without reveling in the nightmare. There's also a strong sense of hope to it; the trials young Dickens endures informs his later writing, which sold so well that poverty became a distant -- if pervasive -- memory. Dickens' life story reminds us that we are capable of succeeding against incredible odds, and that we can transform our lives through art.

Hendrix's belief in the intelligence of young readers was born out of his personal experience with young readers. He toured his solo book, John Brown: His Fight For Freedom, to book fairs and schools, and found that children enjoyed talking about the questionable decisions Brown made. "Kids are all over moral ambiguity. They get it. I've gone to schools to discuss that book, and they want to talk about what he did and why it's wrong, or right."

John Hendrix visits Subterranean Books (6275 Delmar Boulevard, University City; 314-862-6100 or www.subbooks.com) at 6 p.m. Thursday, January 26, to sign copies of A Boy Called Dickens, and also to officially open the show of his art work that hangs in Subterranean's upstairs gallery. Three prints from the book are available for purchase, and some originals may also be available (inquire with the artist). The most important thing, according to Hendrix, is that you bring the kids.

"That should be obvious -- it's a kids book, after all -- but sometimes people think they should leave the kids at home for these events. Bring 'em."