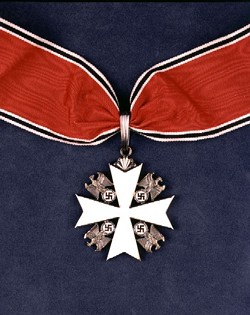 Charles A. Lindbergh received dozens of medals and accolades for his 1927 transatlantic flight, and immediately upon landing became one of the first international celebrities. The medal pictured, however, is the Service Cross of the German Eagle, and it was presented to him in 1938 by Hermann Goering on behalf of Adolf Hitler. The medal was ostensibly for Lindbergh's contributions to aviation, but it was also granted because the all-American boy from Minnesota had become an ardent proponent of Nazi Germany's military superiority and a vocal advocate for American isolationism.

As you might imagine, this stance, and his acceptance of Nazi awards, gained the aviator quite a few critics among the American public. This particular medal, along with hundreds of other artifacts and records, is currently displayed in the Missouri History Museum's long-term exhibit, Lindbergh, which closes at the end of the month.

Artifacts such as Lindbergh's Nazi prize and his damaged public image in the late '30s and early '40s are part of what makes the exhibition so interesting -- there's no shying away from Lindbergh's more incendiary political statements, which gives a clearer picture of a complex man who was first hero, then victim, then villain and ultimately no more nor less flawed than any other human being.

As an unwitting pioneer of America's celebrity culture, Lindbergh was the first to make many of the more popular missteps. He chafed at the public's fascination with his private life and yet used his public stature to try to influence politics, with disastrous personal results. And just like any number of modern celebrity screw-ups, Lindbergh eventually rehabilitated his image and was restored to his position of honor in the American pantheon. It's a cycle that's familiar, and yet seems strangely out of place in the context of the Greatest Generation (TM Tom Brokaw, used without permission), when everyone was supposedly a great patriot and loyal American.

Lindbergh closes on Tuesday, January 31, so that the historical objects can be restored and touched up where necessary. Take this final opportunity to see it and reconsider the legacy of Charles Lindbergh from all sides.