Local Artist Wonders, What If Barbie Were Secretly a Hoarder?

If you've seen St. Louis artist Carrie M. Becker's recent collection "Barbie Trashes Her Dream House" -- and odds are that you have, since the photos have gone viral over the past few days, appearing in, among many other places, Jezebel, the Huffington Post and Time.com -- you may wonder if there's anything, well, autobiographical about Becker's dioramas of tiny rooms strewn with meticulously-crafted filth and photographed so that they appear full-sized.

There's not. Becker's apartment/studio in the Shaw neighborhood is clean and uncluttered. Her art supplies are carefully sorted and stowed and her worktable is bare, except for a laptop and several layers of varnish.

Still, people do wonder. This fall, Becker displayed photos of some of her dioramas in her studio at the McColl Center for Visual Art in Charlotte, North Carolina, where she was an artist in residence. "Nobody knew they were small," she laments. "Everyone was like, 'Did you trash your house? Girl, you need help.'" That was when she gave the collection its new title. Barbie has a dark side, too, you know.

And no, Becker, who is 33, does not have an unnatural obsession with Barbies or dollhouses. She is, however, an avid collector of miniature household accessories produced by the Japanese company Re-Ment. 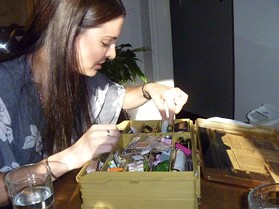 The products are surprisingly -- and adorably -- realistic, all on a 1:6 scale. But it didn't occur to Becker that they might also be art supplies. "I collected them in my curio cabinet," she says, "like your grandma collects Hummel figurines."

For five years, Becker worked as a commercial photographer's assistant in Chicago. The company she worked for specialized in pictures of home goods, in model rooms. Becker acknowledges this as an influence. "It creeps into your psyche if you do it for eight hours a day, five days a week."

Eventually she burned out on photography and decided to go to grad school at Kansas State University to study sculpture. She specialized in large-scale work, figures made of cloth and plastic and wax and whatever else she could find, based on images she'd seen that had been taken by scanning electron microscopes: tiny things, made large. She arranged and then photographed them inside abandoned farmhouses; this project grew into her thesis.

But at the end of grad school, her thesis show completed, with six weeks left to go, feeling burned out but still compelled to produce work, she started playing with her Re-Ment toys, arranging them in little rooms and photographing them to look normal-sized. It was a habit she reverted to after another great period of stress, the preparation of her first solo show, which opened at the McColl Center last August. (The show, called Elements, will reopen next month in the Gallery of Contemporary Art at Forest Park Community College.)

This time, however, she'd briefly experienced the joy of having cable and an addiction to the BBC show How Clean is Your House? It added a new element to her work.

"The cutesy rooms," she says, "I was done with that. Some of the people in that show are filthy, filthy beasts. There are all these things that are yellow and sticky and dripping flies stuck to the wall. It gave me a sense of dirt."

Since last August, she has made and photographed ten rooms. They have progressively gotten more disgusting. The kitchen looks merely cluttered, but the bathroom is caked in layers of filth and the toilet is close to overflowing and filled with turds. (Becker crafted them herself, from tiny bits of clay.)

"I just sat there and laughed like a sixteen-year-old," she remembers. "It's a huge departure from my 'serious' body of work. I don't laugh when I make sculpture, but this is funny as hell."

She posted the photos to her Flickr account. As of last Thursday, she'd gotten a couple hundred views. Then somebody -- she doesn't know who -- posted the link to MetaFilter, where it was picked up by dozens of other websites. Since then, she's gotten 83,000 hits.

"It's surreal," she says. "I remember feeling kind of nauseous and thinking, this is the sort of thing that happens to other people, not me."

Prints are available on her Etsy site, though she has yet to sell a single one. She wonders if people are just repelled by images of filth, even artistically-rendered ones.

She has found some validation in the attention, though. "Sometimes I question my sanity. I could have a real job and interact with society. Or I could go to my friend's house and hang out. Or I could be lazy and take a nap. But I'd rather do this. And people like it. So I must not be crazy."

Yesterday afternoon, Becker showed Daily RFT how she creates a hoarder's kitchen.First you build the room:

Some of that furniture really is from Barbie's Dream House, only Becker makes sure to obliterate any traces of pink with spray paint. The stains on the floor are coffee. Coffee is very useful in creating filth. So is actual dirt, collected from the filter of a Dust Buster. The dog poop on the floor is a Re-Ment meatball, re-purposed.

Becker finds the right camera angle so the room will look full-sized and frames her shot so she knows where to strew the trash. She also sets up lighting. She prefers her final images to look like somebody just walked into the room with a cheap camera and used the flash; she finds they look more realistic that way.

Then the filthing-up begins, sometimes aided by tweezers.

Since Re-Ment specializes only in cute things, Becker makes all the bags, boxes and other garbage herself. She spent 40 hours creating a cache of wadded-up newspapers. She doesn't hesitate to incorporate bits of her Re-Ment collection, though.

And in real life.