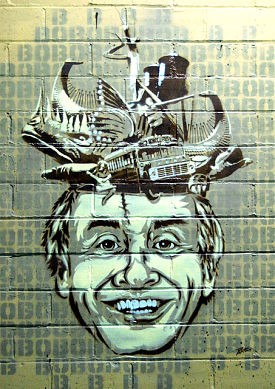 Here's one thing anyone who knew Bob Cassilly will agree on: Cassilly, whose body was found yesterday morning in a bulldozer at Cementland, his larger-than-life sculpture museum/creative experiment, died the way he lived, building something unlike anything else the world had ever seen.

"He was out there working every day," recalls Bill Streeter, a video artist and friend of Cassilly's. "It was his favorite thing to do."

And here's another thing anyone who knew Cassilly or visited the City Museum can agree on: There will never be anyone else like him.

"That a single mind has the whimsy to conceive something like that, and the muscle to make it happen," marvels Matt Strauss, founder of White Flag Projects. "That's singular."

"He really put St. Louis on the map as far as being creative goes," says Barbara Geisman, the city's former executive director of development, whose friendship with Cassilly stretches back to the 1970s when they were among the first urban pioneers to settle in Lafayette Square. (Geisman and her partner, PR maven Richard Callow, later moved into the City Museum building.) "The City Museum got people to come downtown who wouldn't ordinarily be near here. It made them realize there's more to downtown than a baseball stadium."

Before he became a builder, Cassilly was a sculptor. He worked mostly in concrete, though Geisman also recalls him using the wood left over from the renovations of his house in Lafayette Square to create dragons in empty lots. He populated Forest Park with baboons, a hippopotamus, Marlin Perkins and the giant turtles in Turtle Park. He also made a surprisingly ethereal monarch butterfly for the Butterfly House in Chesterfield.

But his most lasting achievement will undoubtedly remain the City Museum, an urban wonderland of caves and five-story slides and an enormous jungle gym that also encompasses a circus, a surprisingly sober display of some of St. Louis's discarded architectural treasures and a shoelace factory, an homage to the building's earlier incarnation as the International Shoe Factory.

"We closed on the building on June 21, 1993," recalls Tim Tucker, who left his position with the Missouri Department of Mental Health to go work for Cassilly. "I told Bob to buy the smallest building on Washington Avenue because everyone else who had tried to build there had gone broke. He said, 'I bought the International Building.' I said, 'Bob, that's the biggest building on Washington Ave!' That was when 'city' was a four-letter word. Bob negotiated with Washington University to lower the price from $2.5 million to $525,000. Back then, if you gave anyone with any sanity half a million dollars, they would not spend it on Washington Avenue. But Bob said, 'For 69 cents a square foot, you can't go wrong.'"

From the start, the City Museum was destined to be both a work of art and a grand improvisation. The first piece Cassilly constructed, the serpentine wall in the parking lot, won a Concrete Council Award. But just hours before the museum was scheduled to open in 1997, Geisman and Callow were downstairs, pounding nails.

Even after he started work on Cementland, Cassilly continued to tinker with the City Museum, building more slides and installing trees and the world's largest pencil. "As long as there was available space," says Mike DeFilippo, who once served as the City Museum's resident photographer (and also, at one point, the Riverfront Times' staff photographer), "Bob would build something new."

For St. Louisans, the City Museum was a place they could be proud to take out-of-town guests. "Everyone who comes here, even the New York Times, thinks it's a special place, the likes of which will not be found anywhere else," says Geisman. "It's a tribute to Bob's willingness to try anything. He didn't sit around worrying. He was going to try and make it all work."

For local artists, Cassilly was an inspiration. "I moved back here from Chicago, and I wondered if I'd ever be able to stay here," recalls Peat Wollaeger, a street artist. (You can see some of his work on the new and improved South Grand Boulevard.) "But things like the City Museum kept me here. It inspired me, made me think, why not do something like that here and make St. Louis a better place?"

Cassilly hired young artists such as Stan Chisholm and Ryan Frank to paint murals inside the City Museum; another artist, Angela Perry, works there now in the children's art area.

It wasn't just young artists who felt a special loyalty to Cassilly. So did his team of workers, the "Cassilly Crew," many of whom had been with him for 30 or 40 years. "They were his real family," says Tucker.

Adds DeFilippo, "So many employees depended on him for their work and their livelihood and even their identity." They stayed with Cassilly even though they could have earned more money working elsewhere. But, says DeFilippo, "if you had a choice between building a rest stop or building something like the City Museum, to see a child playing on your creation, which would you do?"

This is not to say Cassilly's career was without controversy. The City Museum became so notorious for inspiring lawsuits among people who claimed they had been injured on site that eventually someone put a notice on its ticket booth informing visitors that they entered at their own risk.

"Bob was concerned kids were too sheltered," explains DeFilippo. "He didn't care if somebody fell. He cared if they didn't try."

Cassilly's commitment to preserving his artistic vision extended to other people's art as well. Back in 1972, on his honeymoon in Rome with his first wife, in St. Peter's Basilica, Cassilly encountered what he later described a hammer-wielding maniac (he was actually a Hungarian geologist) attacking Michaelangelo's Pietà with a chisel.

"I leaped up and grabbed the guy by the beard," Cassilly later told People magazine. "We both fell into the crowd of screaming Italians. It was something of a scene."

Cassilly was not above making scenes on his own turf. A few years later, he and his friend Bruce Gerrie (now the curator of the City Museum's architectural museum-within-a-museum) determined that they would save one of the spires of the soon-to-be-demolished St. Henry's Church in the Gate District. They spent a great deal of money tuckpointing the outside of the tower and restoring the masonry so it could stand on its own as a monument to the neighborhood.

"One day," Tucker remembers, "I was at a funeral and my phone rings. I look down and it's Bob. And then it's Bruce. And then it's Bob again. After the service, I called them back. They said the demolition contractor had come to tear down the tower. They parked Bruce's Jeep at the foot of the tower so the [wrecking] ball couldn't get in. The police came, and Bob called the police on the police. They took Bob and Bruce off to jail."

The tower eventually came down, but that, says Tucker, isn't the point. The point is the lengths to which Cassilly would go in order to protect something he considered important.

Many believe that Cementland, which Cassilly had been working on for more than a decade, was destined to be his masterpiece.

"If you quote me on this, I'll deny it," warns DeFilippo, "but I think Bob was a reincarnation of the Mound Builders. He had dump trucks bring 80,000 pounds of earth out there. He wanted to build the highest spot on the Mississippi River. He built pyramids and mountains out there. And a waterslide."

The fate of Cementland is uncertain. "I don't know if anyone else will have the vision to complete it," says Streeter.

But even if Cementland never opens, Cassilly's legacy will remain in St. Louis for a long time. Cassilly told his employees that he wanted the City Museum to continue its operations uninterrupted.

"I still think of him the present tense," says DeFilippo. "I know lots of other people will, too. He left so much that's unique, unique to Bob."

Adds Tucker: "His special genius was that he could see things and think larger than anyone else. It was great being around him. He made you see that reality was far bigger than you imagined."