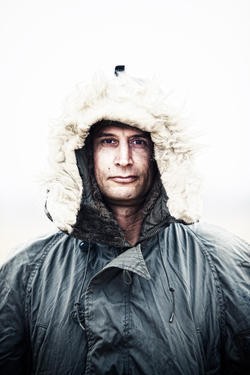 When last seen, Air Force colonel, poet and former Riverfront Times feature subject Ronnie Smith was celebrating the end of a years' long campaign to rename all the airway navigation waypoints on air route A338 between Christchurch, New Zealand, and McMurdo Station, the U.S. base in Antarctica, after eleven sled dogs and ponies that had accompanied Roald Amundsen and Robert Falcon Scott on their race to the South Pole. Smith was also continuing work on a book of poetry about Antarctica and planning an art exhibit with his friend, the sculptor K.A. Colorado.

Now Smith has achieved one more of his goals: His first poetry chapbook, Poems from the Polar Circles, has just been published as an e-book, downloadable for both Kindle and Nook. "The book has a few photos and narrative interspersed with the poetry explaining the wilds and the ways of polar 'space,'" Smith explains.

An excerpt from one of the poems, "The Only Road," also serves as the epigraph for Smith's friend Lynne Cox's latest book, South With the Sun, a biography of Amundsen published last week. Smith himself also makes an appearance in the book.

You knew of marathon. It could be won, after drinks were drunk from milky fountains of quest; where star-eyed falcons stun those frozen seas -- adrift until you would wrest them, with sail of snow and sun.

This is a big season for Antarctica geeks: Exactly 100 years ago, both Scott and Amundsen began their epic treks across the Ice in search of the South Pole. Amundsen and his party arrived and planted the Norwegian flag on December 14, 1911. Scott showed up on January 17, 1912, just 34 days later.

Tragically, Scott and his men were caught in a blizzard on the way back to their base camp; they all died of cold and starvation. Scott's journal, though, which he kept until the very end, literally, remains one of the greatest documents of the heroic age of Antarctic exploration, which may explain why he retains a greater hold upon the popular imagination, though Cox's book may engender a greater appreciation for Amundsen who did, after all, actually come home alive.

Meanwhile, Smith continues to work on the art exhibit with Colorado, and he plans to expand his chapbook into a full-fledged collection.