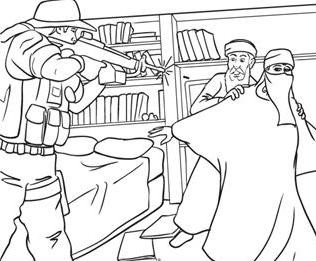 Wayne Bell is at it again. The publisher of the St. Louis-based Really Big Coloring Books has just released another controversial title aimed at educating the preschoolers of America.

We Shall Never Forget 9/11 is a coloring book that Bell says is a "tool parents can use to help teach children about the facts surrounding 9/11." The book includes drawings of people mourning the attack of September 2001, as well as President Bush seated inside the Oval Office. Oh, and it also includes this image (right) of Navy SEALS assassinating Osama bin Laden.

Bell adds that "the book was created with honesty, integrity, reverence, respect and does not shy away from the truth."

Since the book's publication, Bell's company has put out a press release defending it as a "graphic novel coloring book" that should be used with parental guidance. "In this book you'll see what happens to a terrorist who orders others to bomb our peace loving wonderful nation," the press release reads.

Here's a video of Bell defending the book.

And here's a link to an interview Daily RFT conducted with an extremely testy Bell last year after his company published a Tea Party coloring book for kids.