Murals on Broadway Kicks Off in Carondelet 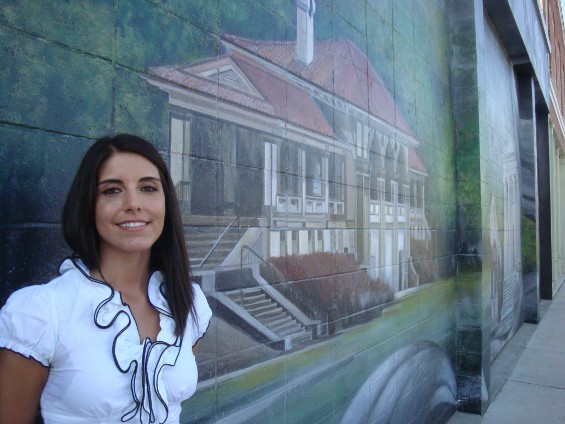 A small throng of community-arts supporters squeezed together on the sidewalk of South Broadway last Friday to celebrate the first piece of art born from the "Murals on Broadway Public Art Program," a grass-roots initiative developed to beautify the streets of Carondelet.

During the afternoon dedication, local artist Vesna Delevska showed off her gigantic mural conveying the historic charms of Carondelet, a tight-knit, traditionally working-class neighborhood founded as a village in 1767. The village would later become its own city before being annexed by St. Louis in 1870.

The new mural stretches across the side of a brick wall sandwiched between a vacant building and Reflex Media Solutions, a video-production company located on the southwest corner of Broadway and Upton Street.

"I hope it inspires the community to use art, in all its forms, as a tool for progress and development," Delevska tells Daily RFT.

The mural, which took Delevska a month and a half to paint, depicts several historic landmarks of Carondelet, including the Carondelet Park Boat House ("it represents health and community," says Delevska), Carondelet Markham Presbyterian Church ("it represents faith and hope") and the Carondelet Public Library ("it represents knowledge and progress"). She also painted her own version of the woman emblazoned on Carondelet's original city seal, metamorphosing a plain-looking figure into an enchanting goddess, her long hair and and loose-fitting garments flowing in various directions. All of these images are perched above Delevska's undulating, blue-gray Mississippi River.

Delevska has a keen sense of place and cultural history. In 1998 she moved from her native Macedonia to Oklahoma, where she painted in college. Now a Carondelet resident, she was attracted to the neighborhood's blend of old architecture and sleepy streets. When the sidewalks are empty, says, Delevska, "the presence of the buildings can be felt in the place of people." (Recently there have been signs that the developing neighborhood, with its affordable housing, is drawing more artists into its fold.)

Delevska and her husband, Larry Farmer, also run the Broadway Bean cafe and gallery, located a couple of blocks south of the mural, where she works as a painter-in-residence of sorts.

The Murals on Broadway project was launched by the Carondelet Housing Corporation a couple of years ago. It will oversee the creation of eight to ten permanent murals between Bellerive Park and the River Des Peres during the course of the next two years.

Several city officials were in attendance for Friday's dedication, including Board of Alderman President Lewis Reed, Alderman Tom Villa and Alderman Craig Schmid.

After a brief reception, Delevska and others convened to Broadway Bean, where the young artist picked up her paintbrush once again, creating a large-scale painting to the tune of live harp music.