Shakespeare Festival St. Louis Makes Yet Another Predictable Pick for 2012

Fresh off its annual late-spring run (The Taming of the Shrew), this morning Shakespeare Festival St. Louis up and announced its production for 2012: Othello. You know SFSL, they're the folks who stage one of Shakespeare's plays each year on an outdoor stage in Forest Park and don't charge admission. Sorta like Shakespeare in the Park, only dinkier.

Still, it's cool even though it's not in Central Park. Live theater is capable of producing a kind of energy that movies can never approach, because it's a collaboration not only among the cast and crew but also with the audience. So even though whenever Daily RFT thinks of the Shakespeare Festival we envision a bunch of disturbingly perky people spontaneously bursting out with, "Let's put on a play!" in that overly enthusiastic voice we remember coming out of the mouths of people we didn't like in junior high school, the mere fact that it exists makes us feel good.

If only they weren't so predictable in their choice of plays.

If Daily RFT weren't so darned lazy, we'd have set up a pool and let our readers wager on which play the festival would pick for 2012. Had we done so, we guarantee Othello would have been one of the most likely choices, if not the odds-on favorite.

You see, it's commonly accepted that William Shakespeare wrote 37 plays. In the eleven years of its existence, the Shakespeare Festival has performed...eleven of them: 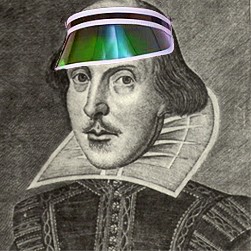 Those T's, C's and H's stand for Tragedies, Comedies and Histories, the three standard categories of the Bard's dramatic output. Note that the Shakespeare Festival began alternating Tragedies with Comedies right out of the gate. OK, they threw a History in there in 2008, and there were back-to-back Comedies in '05 and '06. But Richard III is one of the only Histories that's popular with audiences, and The Tempest, while classified as a Comedy, isn't really funny at all.

At any rate, 2012 was a lead-pipe cinch for a Tragedy. And here's the lineup of Tragedies yet to be performed in Forest Park:

Looking at that list, how many of these plays do you think the average St. Louisan has heard of (much less read or seen)? Had we quit dozing long enough to work out some odds for this year's choice, they'd have looked something like:

You didn't think they were gonna pick Timon of Athens, did you? As for the 70-1 shot, that might even be optimistic for a play whose title ends in "anus."

Looking forward to 2013, it's going to be a more competitive field, but a lukewarm favorite will likely emerge from among The Comedy of Errors, The Merchant of Venice and Twelfth Night.