St. Louis author and photographer William Stage is out with a new book on one of his favorite subjects: the vanishing, brick-wall advertisements that once decorated buildings across America.

Today these signs serve as portals to another time -- back before interstate highways, television and Internet ads and new laws that have all but killed the medium. For Stage, painted wall signs are also objects of beauty, with each sign advertising the skills of the painter as much as the product displayed on the walls.

Stage will be signing his new book, The Painted Ad,  today at the Buder branch (4401 Hampton Ave.) of the St. Louis Library at 7 p.m. and again this Saturday from 1 to 3 p.m. at the Barnes & Noble in Chesterfield.

This week Daily RFT caught up with Stage to discuss his love affair with old signs.

Daily RFT: So how did The Painted Ad come together?

William Stage: I came out with a similar book Ghost Signs in 1989 that contained many of these images and told some stories and history of the craft. Since then I've had people send me their own photos of wall signs. Some of those photos are included in the new book as are the best images from Ghost Signs and a few new photos, too. 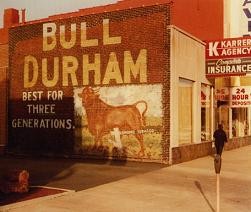 Each photo in the book is actually a postcard that you can tear out and use in the mail. That's pretty cool. Where'd you get that idea?

I operate a postcard company, so it's a bit of a perfect fit. I also came across a similar book in which a guy made a postcard book of Iowa barns. I saw that and thought, "Now that's a great idea."

What draws you to these old signs?

Nostalgia. They're really cool relics. I started taking photos of them in 1974 and have been shooting them ever since. I used to have a job for the St. Louis Public Health Department that had me out in the field a lot and I collected a pretty big portfolio of the signs. I also love the ad copy from back then. It was more naive, more personal and long-winded.

When did these signs fade from fashion?

They were a dominant form of advertising from 1880 to 1950. In 1950, though, these billboards started to migrate out toward the new interstates. It also became easier to make billboards. You could print them off and just paste them onto the billboard. Also lead paint was banned. That pretty much ended it for the walldogs.

The walldogs. They were the guys who painted these signs. They'd travel the country painting these signs. They were colorful characters. You might call them hobos with brushes. They liked to travel and drink. And a lot of them were really great artists. Some went to art school. Some were self-taught, but there's definitely art there.

Have some questions of your own on painted signs and walldogs? Feel free to drop Stage an email here.