Pier Marton: Wash. U. Alumni Campaign to Save Prof's Job 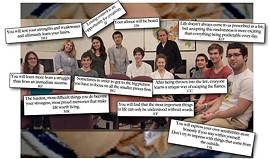 For the past thirteen years, senior lecturer Pier Marton has been a fixture in Washington University's film and media studies program. A renowned video artist who has shown his work at institutions like the Museum of Modern Art and the Whitney Museum in New York, he taught courses in film production, although the department concentrates more on film theory and criticism.

He is, by many accounts from former students, a dedicated teacher. "Teaching is my art form," he says.

Nonetheless, the Wash. U. administration has decided not to renew Marton's teaching contract for next year. Those former students are furious -- and have launched a Facebook campaign in the hopes that the university will change its mind and let Marton stay on.

"He has a very loyal core following of students who would like to see him stay," says Bill Morris, a Wash. U. alum who studied with Marton at the School of the Art Institute of Chicago in the late '80s. "He's a world-class video artist. In terms of his teaching and personal work, Wash. U. would do a huge disservice if they didn't renew his contract."

"She said it was economics," he tells Daily RFT. "The numbers spoke. The low enrollment was seven students enrolled in a class with a maximum of twelve, with an eighth auditing. Last fall, [another instructor taught] a Hitchcock class that had only four students."

The university ombudsman told Marton he had no recourse; his employment contract had always been at-will. Marton had decided at the beginning of his time at Wash. U. to accept the rank of lecturer instead of seeking a tenure-track position because he believed it had better job security; if he'd tried and failed to get tenure, he would have been forced to leave the university, while as a senior lecturer, he might be able to stay indefinitely.

University spokeswoman Sue McGinn says it's against school policy to discuss personnel matters. Studlar also declined to comment. A film production course will be taught in the fall semester, but the instructor is listed on the department's web site as "TBA."

An impassioned letter defending Marton in the student newspaper Student Life has generated 73 comments and a lively debate on the necessity of the university tenure system.

"It can be difficult to explain what it is about Professor Marton that is so rare," writes senior Danielle Hayes. "Imagine a Dangerous Minds where Professor Marton salvages privileged kids from inflated senses of self-worth in lives where one can be kept too busy to think. He grounds us firmly in media while constantly moving beyond media."

Though former students say that Marton gave them a good grounding in the mechanics of filmmaking, Marton always saw his role as more than that. "I like to joke that I was always looking for a department in 'life, film and media studies,'" he says, "but the best I could find was film and media studies. Teaching what button to push is not enough. By the time the students graduate, there's already a new version of the software. What they learn has to be beyond that."

Other students, however, complained to the student newspaper that Marton tended to ramble during lecture and often repeated the same points over and over.

Marton has spent the past school year on the lookout for another job. But he's 60 years old, and three years ago he suffered a cerebral hemorrhage that almost killed him. He was back seven months later, but says he doesn't have the same reserves of energy that he had before.

"I'm unlikely to find another teaching job," he says. "I applied for one at Temple University. There were 120 applicants. They told me I was one of 20 finalists to make me feel better about not getting the job. I'm without health insurance. I don't have enough money to retire. I don't know what I'll do."