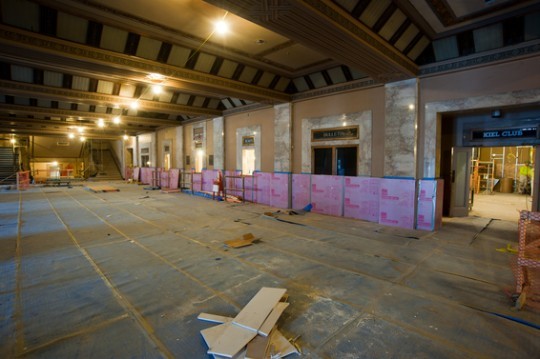 Like many a grand dame who's found herself thrust into our increasingly wired age, the Peabody Opera House is going digital. Today comes a press release announcing you can like the soon-to-reopen theater on Facebook (facebook.com/peabodyoperahouse) or follow it on Twitter (@peabodyoperastl). And, if you're inclined to actual surf the Web, not just follow links from your social media homepages, you can check out the opera house's brand spankin' new website.

But if you're prepared for the fat lady to start singing, not so fast.

Despite the name "opera house," the 3,100-seat theater once known as the Kiel Opera House intends to host a wide variety of events and performers. In fact, one of the Peabody's first-ever tweets yesterday announced that the space will play host to the St. Louis premiere of the Green Day musical, American Idiot. Great show, that, but Die Zauberflote it ain't.

The Kiel had a storied history; it opened in 1934 and, before shuttering its doors in 1991, hosted everything from the Ziegfield Follies to Aida to, yes, the Rolling Stones. Financing was secured in June 2010 to bring the place back to glory and christen it the Peabody, after, yes, Peabody Energy.

The place is expected to open by this fall. You can check out some really cool photos of the ongoing renovations at, yes, the Peabody's new website.