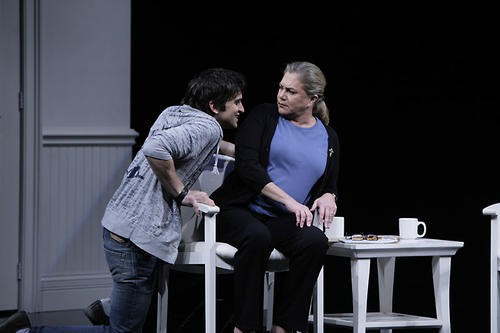 What a difference a day makes!

But better not join those investors in banking on this show. Today's headline tells a different story. "High sinks on Broadway, sets closing date" was the new headline, with, again a story by Newmark. This story went live just about thirteen hours after the first -- reflecting the new information that, despite the investors' confidence, the play was a flop with critics and investors alike. It's now slated to close April 24.

So what's the moral of the story?

First, we suppose, never base a news story on the glowing reports of one optimistic investor. By definition, an investor has every incentive to keep it positive, which is (sadly for the Rep) not the case for New York critics.

Second, we can't help but conclude that one should never, ever doubt the erudition of one Dennis Brown. The RFT theater critic hated High back when it was still just a St. Louis show and everyone else (read: Judith Newmark) was still saying relatively nice things about it.

High isn't really a play at all; it's a contraption in the guise of drama. The symmetrically tidy evening is split into two fifty-minute halves that adhere to a rote formula. Start with a few laughs, then get serious. Along the way, toss in a few obligatory revelations, reversals and red herrings. And so a story that wants to startle us instead feels predictable. In the first scene, for instance, when Sister Jamison is assigned to the case of a deeply disturbed teen who might or might not be a killer, of course initially she must refuse. In the history of theater, has there ever been a social worker who wanted to take a case?

And here's what the New York Times said more recently in its review:

"High," directed by Rob Ruggiero, isn't a particularly subtle or deep drama, despite some fancy narration about the conversion of St. Augustine and the mysterious ways of God in shaping human destinies. ...[M]ost of "High" consists of fraught tussles among the three characters over Cody's fate and the tough love necessary to put him on the right path. Liberally sprinkled with jargon from the scripture of recovery programs, with a further layer of religiosity, the play is essentially a high-toned version of one of those addictive series about addiction that have become a subgenre of the reality television boom. Whether you prefer the foghorn drawl of Ms. Turner or the more soothing tones of Dr. Drew, of "Celebrity Rehab" fame, is essentially just a matter of taste.

The New York Daily News concluded that the play is "provocative, but not always believable." The New York Post added, "'High' has twists and revelations, but no suspense. Nobody will bat an eye upon learning about Sister Jamie's stormy past, or the reasons Father Michael is so invested in Cody's well-being. And when someone eventually makes a direct appeal to God, you think, 'What took so long?'"

Folks, you read it here first.