After their first film, Hooch & Daddy-O, racked up an armful of awards on the film-festival circuit, co-writers and coproducers Jim Ousley and Oscar Madrid went on to take home an RFT MasterMinds Award back in 2009. They've since moved forward with The Bloodfest Club, directed by Madrid, which they hope will be the first feature-length movie by their production company, Crunchy Cool Films. 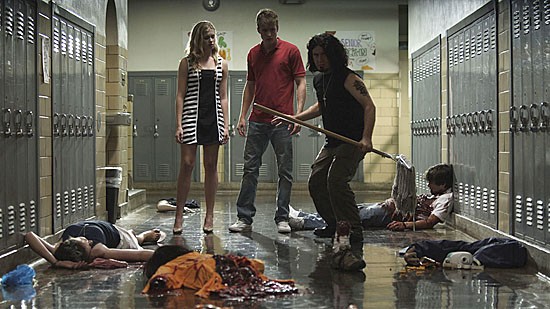 The plot centers around action-film obsessed high school janitor Sonny Kane (played by Ousley) and his battle to save the student body from alien zombies on graduation night. Last week, Ousley and Madrid rolled out the trailer on dreadcentral.com and bloody-disgusting.com, and it has already received acclaim from their moms and fanboys alike.

We caught up with the always entertaining pair to talk John Hughes, the undead and what's up next.

Daily RFT: Congratulations on the debut of your trailer! Where did the idea of producing a short, twelve-minute version of the film come from?

Madrid: It's really difficult to get someone to pick up a 90-page screenplay and read it and really understand the tone of the film and prove your case for making a movie. So we thought the best way for us to articulate that was to go out and shoot an actual short version of the film. So we went out for two days in August last year and shot in Illinois, in East Alton at a high school, and also out in Hardin, Illinois, at a farm. So we shot those two days, and we've got a twelve-minute piece that we're working on, and then we've got this trailer cut out of that footage. Our goal is to create enough awareness and buzz that we could get enough interest to complete our fundraising and get the movie going for feature length.

Ousley: The whole idea was that because film is a visual medium, we thought people should see something.

Madrid: We were brilliant! It took us, like, three years to figure that out!

Through a friend of a friend, you found the farm and the high school to shoot at. Once the locations were established, did the shoot go pretty smoothly?

Madrid: We had a great crew. We showed up with no idea how to make a movie, and we surrounded ourselves with people that did, and then they did everything. They're on walkie-talkies and headsets...

Ousley: No one's asking questions, everyone's just doing. That's what was remarkable about the whole thing. The people we had on the crew -- some of them had worked together before -- they were such nice people, but they were also so talented and enthusiastic. It was the ideal situation for a two-day shoot. It's a twelve-minute movie, and we couldn't have asked for anything better.

So that was last August. How long did it take you to get to the point where you had the twelve minutes and the two-minute trailer?

Madrid: Up until about a week ago. There's so much more that we wanted to do, but I think it gives you an accurate idea of who the character is, and how he interacts with the students. And I think the tone's pretty clear. We've got the '80s vibe, and the music that Jim's worked on, and it definitely has the feel we want and the look we want. The sound design is wrapping up; the color correction is also wrapping up. We had digital effects that were done; we plan to enter it into some film festivals, and we plan to promote the trailer online. So that's the goal, to broaden our exposure as we go.

What's the next St. Louis festival you're looking to enter? Is the St. Louis International Film Fest in the fall too soon?

Madrid: No, not at all. There's a showcase this summer, but I think probably the St. Louis International Film Festival would be a good opportunity for us.

Ousley: Otherwise, as far as the schedule of how these things fall, it's probably more out-of-town stuff. So that's the next step for us.

Jim, you play Sonny, the main character in The Bloodfest Club. How would you describe him?

Ousley: Sonny Kane is a good-hearted, but very confused, janitor who grew up on nothing but action films. And that's how he deals with things in his life. That's his only survival mechanism. So as janitor of this high school, every instance, every scenario he approaches, he does so in a stylized way.

Madrid: One example in the script is, the cheerleaders have dumped their lime Slurpees behind the school, and he assumes it's a toxic-waste spill. So he's very much high intensity, high drama, all the time.

Ousley: But it's very sincere. He's the most genuine person you'd ever meet. But the experiences he goes through in The Bloodfest Club -- fighting alien zombies --

Madrid: He's perfect for the job.

For janitoring? Or for fighting alien zombies?

Ousley: For all of it.

And how is he received by the high school kids before and after the invasion?

Madrid: Because he's the only one left.

Are there obvious parallels people will recognize between The Bloodfest Club and other films?

Ousley: The thing about The Bloodfest Club is -- and when people hear about the idea -- they think it's more of a Scary Movie kind of thing. But it's not a spoof at all. It's really its own story. The reason why we thought The Bloodfest Club was a good title was because of the films of John Hughes and horror films of the '80s -- the stuff our parents wouldn't let us watch but we'd sneak away and watch anyway -- that's sort of the fabric of our formative teenage years, when we fell in love with movies. So it's visceral in the sense that it's not a lightweight spoof. There's real characters with real consequences. Characters that you do like will die in the movie. When people are finished watching The Bloodfest Club, we want people's ribs to be hurting because they're laughing and screaming. We want the laughs to be good and the scares to be real.

Ousley: We're happy, too, because so far the trailer has received a really enthusiastic response. So we're really excited about that.

Madrid: Our mothers, I mean, both loved it.

Madrid: Yeah, my cousin actually "liked" the post as well.

Ousley: Besides accolades like that... We haven't had a chance to film anything since Hooch & Daddy-O, and I think some people may have been expecting that level of production value --

Madrid: Which was amazing -- we didn't think we could top ourselves.

Ousley: When your budget is lasagna, it was amazing. But it was very important to us to take it up not just one notch, but a few notches. And that's what we did, and so far the reaction's been really fantastic. Which feels great.

Your production company, Crunchy Cool Films, produced your well-received film Hooch & Daddy-O. Will that outfit concentrate more on short films or full-length ones?

Madrid: Full-length feature ideas are really our focus. We'd like to write more scripts -- even a followup to The Bloodfest Club. It's called Sixteen Corpses.