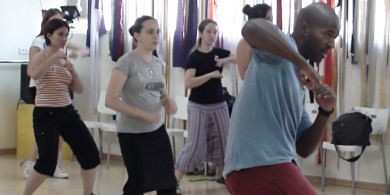 Universal Beatz, a hip-hop conference currently underway on the Washington University campus, was designed to bring Middle Eastern artists together with their local counterparts -- facilitating "cross-cultural exchange, dialogue and collaboration."

But the conference hit a snag before it even began, thanks to the biggest Middle Eastern issue of them all: Israel. After getting protests from Palestinian activists upset about the inclusion of an artist -- St. Louis native Marvin Casey -- who receives funding from a Zionist agency backed by the Israeli government, the conference organizers officially uninvited Casey.

The Palestinian activists praise that decision. But they're not so thrilled about what happened next: Organizers then booted two Palestinian artists, known as BiRD and Sharif "The Truth," apparently because the two had been part of a threatened boycott over Casey's inclusion. Organizers allegedly informed the artists that they wanted to keep the event non-political.

Non-political? Didn't they realize they were dealing with, ahem, the Middle East?


The hip-hop exchange week was organized by Wash. U. undergrads. But its list of participants quickly drew fire from the St. Louis Palestine Solidarity Committee, which has a long-standing policy of boycotting any event featuring participation by the Isreali government or organizations that receive its funding. That threat led to Casey's disinvitation.

In an email, Casey tells Daily RFT he finds the situation unfair. A St. Louis native who moved to Israel and converted to Judaism, he acknowledges that his dance troop, Tribe 13, receives funding from the Jewish Agency for Israel -- a government-funded group that encourages Jews to move to Israel and helps them assimilate when there.

But he says he's stunned that Palestinian activists have painted him as an ambassador for the Israeli government. "The Jewish Agency gave us funding because they approved of an idea that we presented to them," he writes. "Ironically, the idea that was presented was to bring people together of all backgrounds in the idea of creating dialogue and connection between them, while using hip hop as a medium. If that sounds familiar, it's because that was the goal of the conference as well."

He adds, "We have never been contacted by the Jewish Agency or anyone connected to the government as far as being requested to perform a certain way or to an exclusive group or to present a specific message." Without his participation in Universal Beatz, he notes, the group is without any Israeli participation.

"I ask the question, how can that happen during a conference that is labeled a Middle East conference?" he writes.

And Casey's not the only one who's unhappy.

Not surprisingly, Universal Beatz's decision to give the boot to Palestinian artists who dared to threaten a boycott has also drawn condemnation. Sandra Tamiri, a Palestinian activist who was scheduled to speak on a panel at Universal Beatz, tells Daily RFT she withdrew upon hearing that BiRD and The Truth had been dropped from the conference.

Tamiri had protested Casey's inclusion. ("He's originally from St. Louis, he's African-American -- it's this great image of inclusion the Israeli government is trying to promote," she says. "At the same time, for myself as a Palestinian, I'm harassed, held up at the border, when I'm just trying to visit my family.") So she was pleased with him getting the boot -- but can't believe it led to two Palestinian artists getting kicked out, too.

"I told the organizers I had a problem with Palestinian individuals being disinvited -- just because an Isreali official was disinvited," she says. "I see that as faulty thinking."

On its Facebook page, Universal Beatz wrote that one goal for the week was to increase "knowledge through interaction, collaboration, exchange, and shared experiences." Even more odd: A press release issued even after the three artists were axed stated that the exchange week hopes to discuss "the role of hip hop as a medium for expression and the political climate in the Middle East." So it's more than a bit ironic that it ended up canceling invitations for the very artists who might have something to say about politics.

But Tamiri, for one, says she understands where the organizers are coming from.

"They've been very kind," she says. "It's a tough position they're trying to navigate, on a campus that tends to be very pro-Israel. They have good intentions; they did what they had to do. And I did what I had to do."

On that point, at least, the Israeli artist agrees. Casey says he also feels that Universal Beatz did its best -- but, he says, the process was far too arbitrary. (He says he's worked to "build bridges of peace" with Israelis and Palestinians, but he never got a chance to explain that before getting axed from the exchange week.)

"If anything, upon being invited, there should have been an interview process of some sort that everyone would need to pass through, with the decision...being left to the executive committee of Universal Beatz," he writes.

Daily RFT left messages seeking comment yesterday with the organizers of the Universal Beatz conference. We'll update this post if we hear back from any of them. UPDATE: Universal Beatz organizers posted this statement, first published in the Wash. U. student newspaper, in our comment section. We're still hoping for a phone interview, so stay tuned.