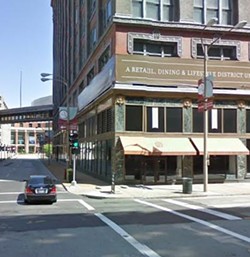 Downtown St. Louis is set to get a movie theater -- nearly a decade after the city's last urban theater closed its doors.

As stltoday.com reports this morning, the new theater is slated to open a year from now on the second floor of the old Dillard's department store. St. Louis Cinemas, which also operates the movie theaters at the Galleria, Chase Park Plaza and Moolah Temple, will operate the new three-screen venue. Admission will be 21 and up.