A nondescript office building in Maplewood has transformed itself this week into an art gallery displaying some of the most gorgeous ceramics you'll likely ever see.

Bill Schmidt, founder of the advertising/marketing firm Kitchen, discovered the works of the Ardmore Art Studio while on a vacation to South Africa nearly a decade ago. Since then he's become one of the studio's biggest fans and supporters -- so much so that Ardmore recently asked him to be its North American supplier.

"I couldn't do that. I have a business to run," says Schmidt. "But I would love to keep hosting local shows for them. It's such a wonderful thing what they're doing."

Ardmore trains local Zulu people how to cast and paint ceramics. Proceeds from the sale of the art goes to providing the artists with medical care, skill development and insurance.

"What's really transformative is the way Ardmore impacts its women artists -- many of whom live with AIDs and HIV and are shunned in a male-dominated society," says Schmidt. "Ardmore gives them independence."

Last year Schimdt and his colleagues at Kitchen imported about 50 pieces of Ardmore work for an exhibition and sale at their office. This year they've brought $25,000 worth of ceramics -- more than 100 pieces.

"We've had people calling all year asking when we're going to host our next show," says Schmidt, who expects to sell out of items this year. "The people of St. Louis have really responded." 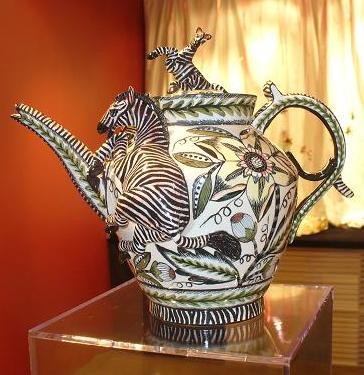