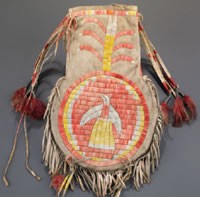 The last time Riverfront Times reported on a loan of Native American artifacts to a local museum, the story didn't really have a happy ending. Nobody knows what happened to about 30 of the pieces the Airis family donated to the Saint Louis Science Center back in 1974.

Undeterred by the Airises' misfortunes, Carolyn Danforth decided last Thursday to donate her own collection of Native American art to the Saint Louis Art Museum. (Museum director Brent Benjamin told the board of directors that it had taken some time to persuade her to give the collection to the museum, but mostly for sentimental reasons.) The collection actually belonged to her late husband, Donald Danforth, Jr., who died in 2001. It consists largely of work produced by tribes who lived in the Great Plains.

Benjamin said that it was one of the most generous bequests in the museum's 131-year history. Since it comes with a $2 million gift, which will be used, in part, to set up a new gallery especially for the pieces, we're pretty sure the Danforths will have better luck than the Airises.