St. Charles Writer and Romanian Artist Collaborate on a "Dark Fairy Tale" of a Comic Book 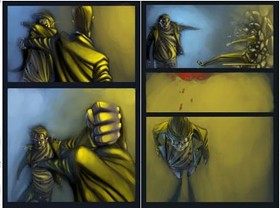 Seven years ago, on his fifteenth birthday, Theo Scheresky began work on what would become his epic comic, Late Sunsets, Early Sunrises. It was a tale of a pair of star-crossed lovers, Will and Meghan, who are thwarted in their attempt to escape the dystopian "Lost Vegas" of the near future for a better life in Missouri. Meghan is killed. Will meets a mysterious old hermit who promises he can restore Meghan to life -- if Will agrees to murder 99 evil men.

Originally Late Sunsets was a 300-page novel, but as the years passed, Scheresky, now 22, converted it to comics form. The only problem was, although he had been writing comics since the age of six, he couldn't draw. So he put out a call on the internet for an artist who would be willing to work for what would likely be no pay.

Idiceanu Mihai, a 19-year-old art student living in Romania, was one of the few who responded. Now, after six months of intense work, the first of six projected volumes of Late Sunsets goes on sale this Friday, August 20, at Fantasy Shops across the St. Louis area, as well as Comic Relief in St. Charles and Star Clipper in the U. City Loop, and online at Bloody Disgusting Comics. It's a limited run of just 100 books, but Scheresky promises each copy will be signed and numbered.

Scheresky and Mihai, who goes by "Dice", have never met. The two communicate mostly by e-mail in work sessions that can last through the St. Louis evening and the Romanian night.

"[Mihai's] work ethic is amazing," Scheresky says. "I've only ever asked him to throw out one page. I have an idea and then he always makes it better. By the end, I'm blown away. I owe him a beer."

Mihai's pencil and charcoal drawings bring Late Sunsets to life, but the story is all Scheresky's.

"For my fifteenth birthday I got the CD Three Cheers for Sweet Revenge by My Chemical Romance," says Scheresky. "I really liked the song 'It's Not a Fashion Statement, It's a Death Wish.' It's about coming back from the dead and seeking revenge. I was also going through my first breakup. At the same time, a friend was going through a breakup. It had been the sort of relationship that alienated everyone. I began to wonder what people will go through for love."

In Late Sunsets, Will is a peaceful gardener until he meets Meghan, the wife of his employer, a powerful drug lord known as The Don. The two lovers, obviously, cannot survive together without leaving the world they know in "Lost Vegas," and, obviously, they cannot avoid The Don.

As Scheresky writes in the book's introduction:

So begins the story of death, damnation, and morality that is the final days of Will Morris' soul. For when he awakens Will is less of a man and more of a monster. A monster that cannot step into the sun directly without searing the flesh from his bones and boiling the impossibly stilled blood in his veins. A monster with a hunger for revenge and death that will stop at nothing until its debt is paid in full. A monster that becomes less human by the day, seeming to put a terrible deadline on Will's contract.

Late Sunsets is full of blood and gore, but Scheresky sees it as more than just another horror comic.

"It's such a glutted genre," he says. "There's so much out there, and I've lost hope reading it. So much is disappointing. It shouldn't be like that. It should be like a Scorsese film. If you just go for the blood and violence, you have nothing to say. Horror has a hardcore fan base. The fans love the genre, but we know what we want, and it's not Saw 69."

He has high hopes for Late Sunsets. "If people don't like it, fine. But if they get it, that means the most to me."

Scheresky will be signing copies of Late Sunsets on Friday from 5 p.m. till midnight at the Fantasy Shop in St. Charles. Volume 2 will be out in October.