From Citygarden to the colorfully painted parking pots on South Grand, St. Louis already has its share of public art. The problem, some elected officials and activists believe, is that the vast majority of the city's public art is concentrated in already-bustling areas like Downtown and the Central West End rather than rebounding neighborhoods on the north and south sides.

That could soon change.

The Board of Alderman is considering a proposal that could significantly increase the number of public art projects across St. Louis and expand stewardship of the pieces that are already in place.

At the end of April, Alderman Antonio French of the 21st Ward introduced Board Bill 2. The measure would take one percent of the money allocated for public works projects in the city and establish a "Public Art Trust Fund" to be managed by the Regional Arts Commission (RAC.)

Half of the one percent would go toward creating public art -- examples of which range from murals to creative landscaping to statues to colorful lighting to artist-made park benches -- at the site of new construction projects. The other half would be split between "conservation and maintenance" programs for existing works of art and creating new works in neighborhoods where public art is scarce.

French notes similar measures are already in place in more than 300 cities nationwide, including Kansas City and Columbia in Missouri.

"What it really does is add to the character of the community," French says. "Whenever we're going somewhere to repave a street or build a bridge we shouldn't just do it in a utilitarian manner. It should beautify that part of town and entice other folks to do something in what becomes kind of a cool area. Look at places that do have public art -- it's not a coincidence, that's where developers are coming and entrepreneurs are starting to do business."

In addition to managing the funds, the RAC would "develop and maintain a city-wide site inventory for potential permanent and temporary Artwork." Based on that inventory, the RAC would recommend which neighborhoods are most in need of new public art projects.

"This is something up our alley," says Roseann Weiss, the RAC's director of community art programs and public art initiatives. "I think that we tend to look downtown or places where there is tourism for putting art pubic art pieces while forgetting what public art can do in a neighborhood. It can create a center and a sense of place."

Weiss notes that the RAC already has a partial inventory of public art in the St. Louis area available on their website and on Google Maps. Here's a pic of their art catalog of just the city: 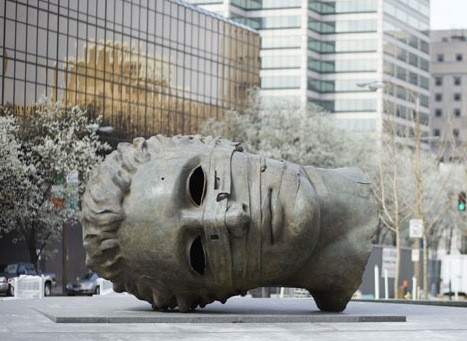 The Board Bill already has sixteen co-sponsors and only requires fifteen votes to pass. If approved, the measure would take effect in July 2011.

"I hope is in ten years we'll look back an see this as a transformative event in the city," French says. "We'll look back and say 'That's made a difference. The thing I'm looking at right now was made in part because ten years ago we said we should make public art a priority."