No Banksy? No Problem. Spray Paint Still Flowed This Weekend in St. Louis.

May 17, 2010 at 3:00 PM
comment
Banksy's kick-ass movie "Exit Through the Gift Shop" opened at the Tivoli on Friday and there was much speculation among the audience as to whether the man of mystery was in town to leave his mark (and art) on St. Louis. The Englishman covertly traveled with the film to Detroit, Toronto and Boston shortly after so why not here too?

Alas, it seems Bansky spent the weekend in New York putting up pieces like this: 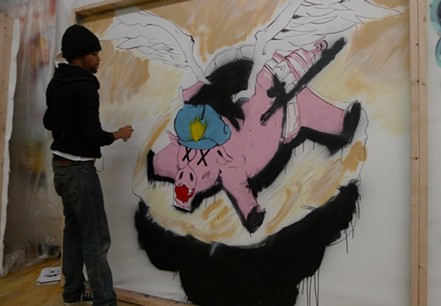 Nevertheless, there was still plenty of graffiti goodness to be had at 2720 Cherokee. The music venue/art gallery hosted an NCAA Tournament-style street art competition featuring with a dozen local artists.

The contest was sponsored by R-Sole (the custom kicks store in the Loop) and the winner took home $1,500.

Rain moved the competition indoors but a good-sized crowd braved the paint fumes to see what the artists could do with eight-foot by eight-foot pieces of canvas. There were three, ninety-minute rounds, each with head-to-head, side-by-side match-ups between the artists. The materials they used ranged from classic spray paint to airbrush to black magic markers to classic brush and palette.

The winner was a PBR-swilling guy who went by the name Grandpa and hailed from Springfield, Missouri. His is the one on the right in the picture below. Chris Sabatino (owner of the amazing Art Monster store on Cherokee Street) came in second with his piece in the center. 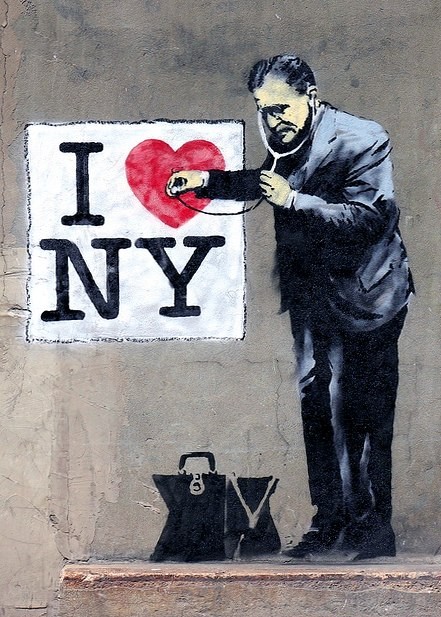 Here are a few other snapshots from the event. Click here to see a slideshow with a whole lot more. 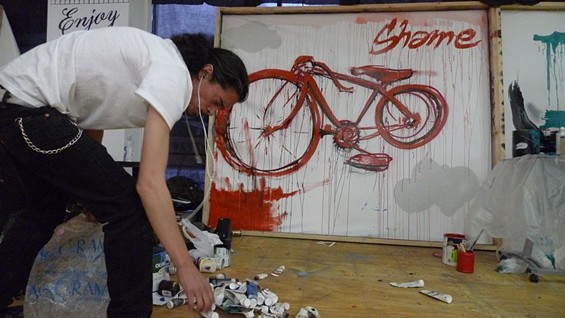 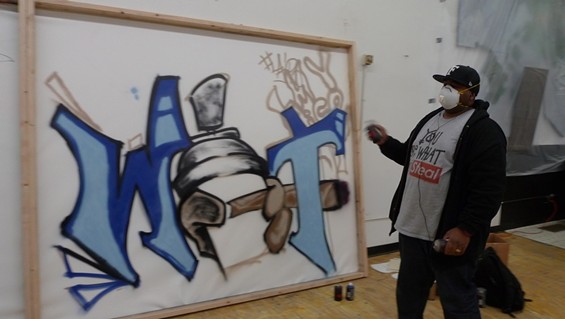