Norm Macdonald at the Funny Bone in Westport: A Two-Show Recap

February 08, 2010 at 4:16 PM
comment
Is there a comic touring today who makes better use of the word "cock"? It's a funny word, sure, but in Norm Macdonald's delivery -- distinctly Canadian, equal parts Eddie Haskell and sedated invalid -- "cock" becomes poetry. Unless you hear Macdonald say it repeatedly, to explain its power is like trying to justify suits with bolo ties. You can't.

You can, however, rank Macdonald as a high-profile veteran whose career has run the gamut in showbiz. Absent a comedy album of his own, he's done it all: Saturday Night Live, short-lived sitcoms, patchy movie work, and (in that last pit stop of celebrity) now poker phenom.

For a select few, though, it's Macdonald's talk-show appearances over the years -- Conan lost his mind in 1997, Letterman gets kittenish, both Dennis Miller and Jon Stewart have cried uncle -- that capture the essence of his appeal. They are events of deadpan cracks and wangled non-sequiturs. Even his recent performance at the roast of Bob Saget -- anti-comedy made artful -- revealed his peculiar style. So far as I can tell, almost everything Norm Macdonald says or does is funny.

At Westport over the weekend, all of those gifts -- the command of cadence, the attentiveness to the tiniest details, the fascination with the morbid and the macabre -- were on full display. A large chunk of Macdonald's hour-long set probed the sexual differences between men and women. Both nights featured an extended bit on Tiger Woods the "sex addict, or what I like to call him: a man."

An intervention for Mick Jagger by the rest of the Rolling Stones -- "Mick, you're having too much sex" -- would be just as absurd. Another two-night bit discussed the venues in which women, futilely, act like men: strip clubs and the WNBA, which is "for all those who can't make the NBA." Then again, as he later acknowledged: "Women create life, and all men can really do is hang around."

In fact, Macdonald's best bit, at least in the shows I attended, wondered why serial killers don't dig deeper graves. In lesser hands, such material might die on delivery. But in Macdonald's zoned-out riffs -- which assumed, as the evening progressed, the quality of an impromptu toast (that's an evaluation, not a compliment) -- there's nothing to do but submit. 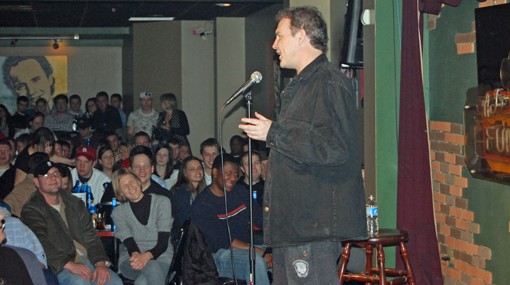 At least that went for most of the audience. Host Joe Murray and feature performer Matt Conty, both local comics with strong material themselves, endured expected, if still irritating, dimwitted heckling and shouts for the headliner. More surprising, though, was the number of walkouts I witnessed both nights during Macdonald's set.

"I remember the adorable Norm," one woman harrumphed.

Adorable? I think her date was wearing a bolo tie.