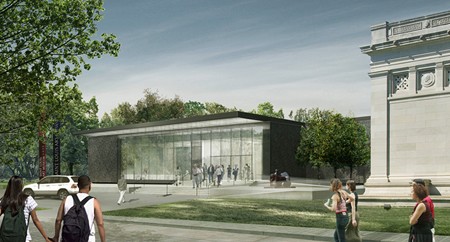 Maybe it was the New York Times article last week that lumped the Saint Louis Art Museum in with a growing number of arts institutions that have scaled back or abandoned their plans to build costly new additions.

Or maybe it's indeed a case of the credit markets rebounding and a rosier outlook ahead.

Whatever the reason, last night the Board of Commissioners of the Saint Louis Art Museum voted to move forward on a $130-million expansion that has been tabled since November 2008.

The addition, designed by London architect David Chipperfield, will include 300 underground parking spaces and increase the musuem's gallery space by 30 percent.

Construction is to begin as soon as possible and is expected to last two years.

The museum's commissioners yesterday announced that they have raised $135 million in pledges for the project and closed on a $45-million bond jump-start construction.