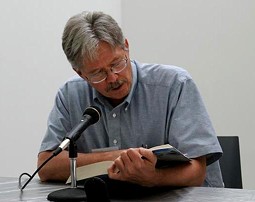 In January 2008, Walter Bargen of Ashland, Missouri was tapped to be the state's first Poet Laureate. With his term winding down, he recently took a moment to discuss the experience with the Daily RFT.

Daily RFT: Your two-year tenure is almost up. What's it been like?

Walter Bargen: I'm surprised at all the interest, and it hasn't really let up the way I thought it would. It's a little stressful and exhausting.

How so? What does the state expect from its official bard?

I've been really fortunate [in that] I've been left to my own devices. The position has been a work in progress in a lot of ways. Originally, there were certain minimum requirements. It was six public appearances a year, then write a poem for the state of Missouri. But they backed off of [the poem requirement]. They were concerned about writer's block, and they didn't want to encourage doggerel.

But I think in the first month I satisfied the requirement of six public appearances. This September and October, I'm probably averaging 10 events a month.  By the time I'm done, I will have made easily over 100 appearances, and dozens of interviews.

Is it a paid position?

It seems like it's unpaid. There's a $2,500 stipend and $2,500 for expenses each year, but that [expenses allowance] lasted about three months. I've probably driven 40,000 miles. Whoever does this next is going to need a good car.

Who has booked you to speak and do readings?

You're obviously someone attuned to the nuance of language, but in interviews like the one we're having now, you don't have time to craft your words as you would a poem. How's it been dealing with the media?

When you're spontaneous, there's always the opportunity that you'll surprise yourself and discover something new.

There is one question [in interviews] that always catches me up short: 'What makes a good poem?' [On one occasion] I said, 'A good poem is looking for the 800-pound gorilla running through the rooms of your life.' That surprised me. I felt it was more satisfactory than saying it has an authentic voice, strong rhythm, etc. That list could go on for a day, and you could still not have a sense of what makes a good poem.

Basically poetry is not only something enjoyable, but a reservoir for wisdom, and a mirror that people can look into and see something in their own life.

You've been writing a regular column for the Post-Dispatch  in which you spotlight works by Missouri poets (for example, Jon Dressel of St. Louis). What kind of feedback have you gotten?

It's been amazingly positive, I'm surprised how many people have read that column - not only in St. Louis, but across the state. I did a column on a short poem by Michael Castro. Turned out to be third most e-mailed column for a week [at the PD].

That just let me know that poetry is really alive, that people don't have such a negative attitude that's cultivated in the way poetry is taught in schools.

Ezra Pound once said that "poetry brings us news of the world that lasts." Is there a brighter future in your line of work or mine?

Well, ultimately nothing lasts. Everything is temporal, but some things last longer than others. There's an insight and wisdom in poetry that people keep coming back to for any variety of reasons. In very few words and a very concise way, poetry can be deeply moving. You don't have to read a whole book. You can read one page.

Read an orginal poem by Walter Bargen on the next page...

All photographs are accurate.
None of them is truth.
-- Richard Avedon

This is a wholly comfortable wind,
tailored and too expensive for the end
of a ragged century. Sitting on the porch,
it has us believing again. I breathe
this wind that isn't in a hurry,
isn't pushing through the crowd
of oaks to see what has fallen, isn't
banging unlatched screen doors to get in,
isn't rattling loose panes awake,
isn't scooping up newspapers and forcing
their headlines against fences; it's already
too late. We drink coffee, balance
cups on the wooden railing and forget.

The bird in the photograph has already
abandoned the air and stands
on barren ground, a lord with wings
folded, statuesque, a feathered black
granite that has dropped from an African
sky. Though the bird looms large
and too alert, it's in the background,
and on this all too clear and sunny day
we know the bird can't be blamed.
this is simply what it knows best.
though it may have arrived a little
early, it is certain in its waiting.

The naked child, has drawn her kneeds up
to her chest, her forehead pressed against
years of parched ground, her forearms
stretched forward and away from either side
of her thinning body, her back to the steadfast bird,
guardian of this warring, drought-stricken plain.

This is when we want to believe in a wind
such as this one crossing the porch,
that refuses to carry a cry or spread
the scent of finality, and instead braids
strands of warmth through the cool
of evening, between the spaces of outspread
fingers, our hands failed kites,
our lives falling through this luxurious air.

Walter Bargen's new book, "Days Like This Are Necessary," was released a few weeks ago. He will be doing a workshop at The Big Read on Saturday, Oct. 10. For more info, click here. The 61-year-old has lived in Ashland, Missouri for four decades. He is a senior coordinator at Mizzou's Assessment Resource Center.