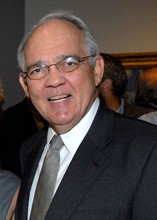 True story. I used to work for a St. Louis publication that each year came out with a supplement profiling the "Wealthiest St. Louisans."
This special edition required us to pore over SEC filings and other public records in an effort to attain the estimated wealth of the individual. That was the easy part.
The nauseating part was then calling up these individuals and families -- whose only news value was their affluence -- and ask them to comment on just how stinking rich they really were.
In the two years I worked on this supplement -- reporting on a dozen or so blue-blooded St. Louisans -- only one person ever called me back. He was Don Bryant.
Bryant, for those unfamiliar, owns a company, Bryant Group, that offers financial consulting and wealth management services to executives and businesses. He's also an avid modern art collector and owner of a Napa Valley winery.
Bryant returned my call from a jet -- and while he wouldn't divulge his true wealth -- he was more than happy to discuss at length his art and wines and hint at his excesses.
That said, I wasn't all that surprised then when I saw that Bryant had opened his New York City apartment to the Wall Street Journal this month to show off his new bride and a collection of works from Pablo Picasso, Jackson Pollock and Willem de Kooning.
Check out the WSJ article and slideshow here.