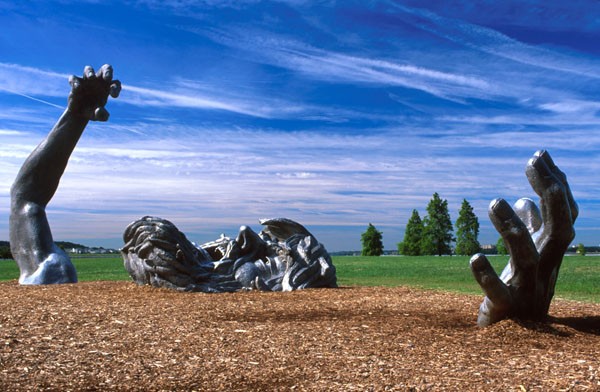 "The Awakening," by the American sculptor J. Seward Johnson, will be installed in the 'burb with help from Chesterfield Arts, according to the AP story.

"This story is worthless without photos," notes commenter "Lord Dreadlow."

But Daily RFT found one. And by the way, it's giant arms, legs and a head that commuters may see coming through the region today...

Johnson's sculptures can be found in public squares throughout the world, including New York's Rockefeller Plaza, Paris' Les Halles and Rome's La Via Condotti.

According to Johnson's website, "Awakening" was selected for the International Sculpture Conference Exhibition in Washington, D.C. in 1980 and drew visitors to Hains Point for almost thirty years before a flood forced its move to the National Harbor.

The "Awakening" coming to Chesterfield is a second casting of the 70-by-17-foot sculpture, not the original.