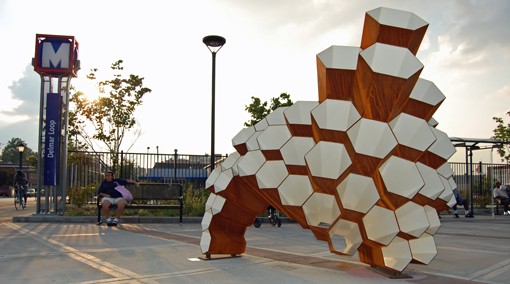 Last night at the Delmar Loop Metro stop, "Hive," a honeycomb-on-acid sculpture by Minneapolis-based artists Janet Lofquist, was dedicated to the public, although anyone who's been by the corner of Delmar Boulevard and Des Peres Avenue since June has probably eyed the steel sculpture.

Video after the jump.

"It's a stately yet rejuvenating kind of structure," Lofquist said of the 6,000-pound work. "It becomes a very fascinating, dynamic kind of work as you move in and out of the space."

The sculpture was paid for in part by Federal Transit Administration funding for capital programs.

Lofquist got involved with Metro because of her working relationship with David Allen, director of Metro Arts in Transit, who formerly worked with Metro Transit agency in Minneapolis. Lofquist also created the "Landscape of Memories" in 2004, a staircase-like sculpture next to the Hiawatha Lightrail in Minneapolis.

To date, more than 150 art projects have been installed in MetroLink stations, vehicle interiors, bus stops, shelters and on buses, as part of the Arts in Transit program.