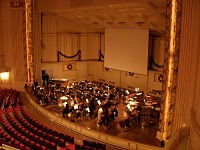 This past season has been a banner one for the Saint Louis Symphony Orchestra. Not only did music director David Robertson make his singing and kazoo-playing debut at Carnegie Hall and management negotiate a three-year labor agreement with the musicians an entire year ahead of schedule, but the SLSO even made more money by playing for larger audiences.

The symphony attracted larger audiences with more popular offerings, like "The Lord of the Rings Symphony", Oz With Orchestra and the Preservation Hall Jazz Band. These SLSO Presents concerts attracted 20,000 visitors, more than half of whom were visiting Powell Hall for the first time.

Says Fred Bronstein, the SLSO's president and executive director: "The 2008-09 Season represents an important step forward in the SLSO's audience-building efforts, and is now the springboard toward a bold goal of doubling our audience as identified in our new 10-year strategic vision....It's a good first step, and now we intend to redouble our efforts to build on this performance next season, and beyond."