June 30, 2009 at 4:20 PM
comment
On a sunny and breezy morning today, elected officials and members of the Gateway Foundation, opened up the 2.9-acre Citygarden to the media, touting its role in reshaping downtown's Gateway Mall.

Since work began 15 months ago, a two-block section of the Gateway Mall has been transformed into a multimedia green space, complete with audio tours and a video screen.

Not unlike New York City's idea to have celebrities provide audio tours of Central Park, local St. Louis personalities provide information via cell phone (314-802-9571) about Citygarden's 24 sculptures and the artists who created them. A variety of voice-over tour guides are in the mix, including sportscaster Joe Buck, former U.S. attorney general John Ashcroft (luckily for the politician who tried to cover The Spirit of Justice, there are no sculpted boobs in Citygrarden), Cardinal great Ozzie Smith and rapper Murphy Lee.
City leaders praised the park as a new destination for St. Louisans and visitors alike. And, in the very near future, one can only hope that the sculptures and waterworks of Citygarden will provide television cameraman in town for the All-Star Game a distraction away from the vacant lot that is Ballpark Village. 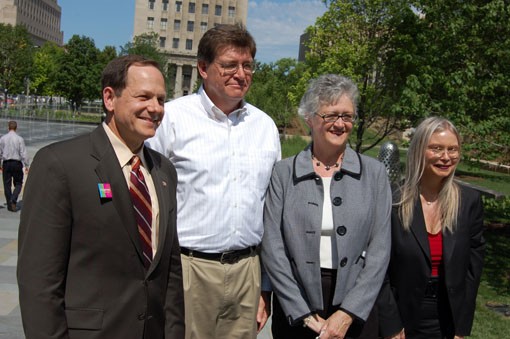 Welcoming visitors into the garden is a limestone wall meant to represent the bluffs of the nearby Mississippi River. Affixed to the wall in brassy metal lettering is the Citygarden logo. (Perhaps a nod to corporate logos adorning the buildings surrounding the park?)

With a bit of tongue-in-cheek hubris, Slay peered down from a podium Tuesday morning to officially request that the park's three fountains be switched on for the public.

"This is Francis Slay, and I'm telling you to start the fountains, and to paraphrase Ronald Reagan, tear down the fences," he said, referring to the chain-link fences around the park's perimeter.

The Gateway Foundation, the group that financed the park (estimates place its price tag at between $25 and $30 million), will pay for all costs of the park, except water and electricity bills. BSI Construction was the general contractor for the project. The city owns the land and the site improvements, plantings and trees, while the Gateway Foundation owns the sculptures.

And for downtown scaredy-cats, Paul Wagman, spokesman for the Foundation, adds that there will be designated security for the park.

For more information about the park's sculptures see: "Citygarden to Open July 1; Downtown Park Will Provide City a Permanent Facelift."