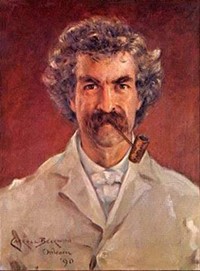 The Adventures of Tom Sawyer, which Mark Twain published in 1876, recounts the adventures of a young boy growing up in the 1840s in the fictional town of St. Petersburg, Missouri, on the banks of the mighty Mississippi.

These adventures include: tricking his pals into whitewashing a fence, releasing a bug in church, wooing the beauteous Becky Thatcher, getting lost in a cave, searching for buried treasure, running away from home to play pirates, attending his own funeral and hiding from the fearsome (and politically-incorrect) Injun Joe.

Now, thanks to a $20,000 grant from the National Endowment for the Arts' Big Read program, St. Louisans will get to experience these adventures again. The five-figure NEA grant, matched by Cultural Festivals, an arts organization in Clayton, will support 50 events throughout the city, most of which will take place next February.

Mark Twain, of course, hailed from Hannibal, Missouri, the model for Tom's St. Petersburg, and 2010 marks the 175th anniversary of his birth and the centennial of his death. His other Missouri-set books, The Adventures of Huckleberry Finn and Life on the Mississippi, were not on the NEA's list of 40 suggested Big Read titles.

"We've planned a trip down to Hannibal to see the sites in the book," says Jessica Laney, Cultural Festivals' program director. "We're going to go on a tour to make the book more real to the kids and their families."

Other events will include discussions of the book at Washington University, the Kirkwood Public Library and St. Louis' charter schools, as well as performances by the Puppet Guild of Greater St. Louis and That Uppity Theatre Company and a showing, in conjunction with Cinema St. Louis, of a shortened version of Ken Burns' documentary on Mark Twain, which features Wash. U. professor Gerald Early.

"We felt with this book, we could tie in art and other avenues," says Cindy Lerick, executive director of Cultural Festivals. "The whole goal of the program is to reach the reluctant reader. [Tom Sawyer] features a boy, which might get a middle-aged boy to read it."

"We handed the book out to our board," Lerick remembers. "Most of them read the book back in fifth or sixth grade, and we started wondering what Tom Sawyer would be like today."

Update: The Foundry Art Centre in St. Charles has also received a $20,000 Big Read grant. St. Charlesians will be reading Tom Sawyer, too.