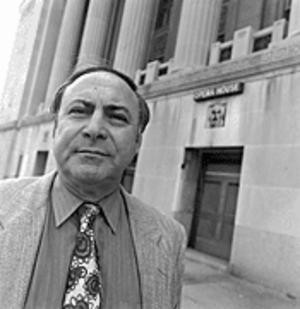 Ed Golterman is a local gadfly who's spent much of the past decade lobbying to have the Kiel Opera House restored. He's received plenty of media attention over years (RFT included -- see "Special Ed," which came out six years ago this month).

So back in February, when word came down that the opera house -- closed since 1991 -- would be rehabilitated and opened up, Golterman wrote us a letter, giving himself credit for his efforts. Now comes the latest news: St. Louis Blues owner Dave Checketts has this project on the fast track and it should be open by the end of next year. The capstone of that project ought to be to  give Ed, who has family roots with the Kiel, a job there when it opens. Something has to fill his time now that his mission appears to be accomplished.

An excerpt from that 2003 RFT story on Golterman:

Golterman's affection for the old opera house runs deep. His grandfather, the opera impresario Guy Golterman, brought Enrico Caruso to St. Louis in 1910 and staged several operas here in the 1910s and '20s before the Kiel opened as the Municipal Auditorium in 1934. Guy Golterman produced some of the first operas at the Kiel during the two-week opening ceremonies, and the family has stayed active in the world of St. Louis opera. Ed Golterman is an accomplished baritone singer and sang the national anthem for the Blues for several years.

As personal as his connection to the Kiel is, however, the 64-year-old Golterman says he's not just trying to save his grandfather's legacy. A fully functioning multiuse venue for concerts, theater and community events -- what he and Breckenridge both envision as the fulfillment of the Kiel's promise -- will be, most important, an anchor for downtown as an entertainment district.

There's already plenty of folks thinking out loud about more than just opera or musicals being performed at the Kiel -- what about rock bands?

Meantime, local restoration groups and preservationists have plenty of other properties in St. Louis to save -- how about those San Luis Apartments?