Catching Up with the Pride of Affton, John Goodman

The big man from Affton is in New York these days playing the character Pozzo aside Nathan Lane (and others) in a stage production of "Waiting for Godot."

Goodman tells the Times of his 30-year battle with alcohol ("I don't know how much the old Jackie Daniels franchise ruined my my memory") and his days at Southwest Missouri State where he "wasted a year in the keg" before discovering acting.

A screen shot of the Times article: 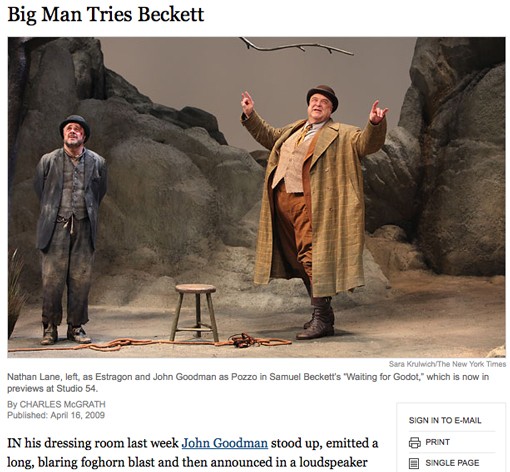 Goodman also tells the Times of his resentment for the show Roseanne that launched his career -- a resentment that he's now comes to grips with. Fans of the Coen brothers films will be happy to hear that Goodman's favorite character of all time remainst the Vietnam vet, nut job Walter he played in The Big Lebowski.