Bill Maher: Was Also Tired of Making Fun of Bush; Enjoys a New World to Ridicule 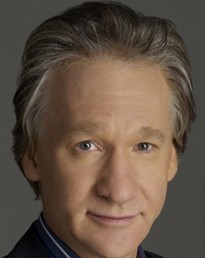 Depending on your own political bent, Emmy-nominated satirist Bill Maher is either a personality you love to hate, or a personality you hate to love. From Politically Incorrect to Real Time and religion to legalizing drugs he's never shied away from speaking his mind, whether in front of television cameras or atop a stand-up stage. Before he performs Thursday at the Fabulous Fox Theatre, Maher talked with the Daily RFT.

How are things generally going at Real Time? Everything chugging along merrily?
I think the audience has really embraced the 10 o'clock starting time. So that's great. We're doing good this year and I think in general, audiences -- whether they be the television audience or the live audience for stand-up -- I think we were all sick of Bush and I think we're all happy that it's a new world, and also a new world to make fun of. It's a whole different set of comedic parameters now. I'm enjoying it a lot because I was sick of making fun of Bush. And now we have a new administration and a whole new set of issues, a lot of economic issues. I've been on a road a lot this year already and I'm telling you, there's comedy in it. People who were worried that comedy was over when George Bush went away can rest easy: There is still comedy.

Your television success hasn't diminished your appetite for live performance. Like you said, you've been out on the road a ton.
More than ever.

What is it about stand-up that keeps you coming back?
I don't have to listen to the guests. No, I'm kidding. But there is something pure about it being just you and the audience. The [Real Time] show is more of a hybrid. I hope people find it to be funny. But it does not intend to be funny all the way through the show. There are moments of comedy, and then there are moments of seriousness where we talk to serious people about serious issues, and that's all well and good. But stand-up comedy has no room for that.

Stand-up comedy is just about laugh, laugh, laugh, laugh, laugh. Now I think that I give the audience, while they're laughing, a lot to chew on and a lot to think about. I think that my show is chock full of ideas. I want it to be. But nothing ever supersedes the prime direction of getting people to laugh, and if you do that for 90 minutes or whatever -- sometimes I go over, but I try to keep it to 90 -- they will spontaneously, at the end of the performance, rise to their feet and applaud you. I have a very singular, focused goal every evening, which is to make them laugh so much that at the end they're like, "¡No mas!"

Easy as that, huh?
Not easy. I've been doing this 30 years! I do have it down by now. But boy, it took a lot time. It's like being a gondolier maker or some shit.

That's an interesting comparison.
I think I read somewhere that it takes, like, 20 years to learn how to make a gondolier. A really good one. You don't want to get one of those off-the-rack gondoliers.

You took the making of 2008 documentary Religulous to be a personal duty. I assume there was still some catharsis to releasing it? You were happy to do it?
Oh yes. And I'm happy it wound up so far being the sixth-highest-grossing documentary ever. I did exactly what I wanted to do. It took me ten years to get this movie made, so this is not an overnight thing, but I finally found the right director in Larry Charles and we made a movie that was loved by just about everyone who saw it. Now the proviso there is, of course, most religious people didn't see it, and if they had seen it they probably would have not liked it. But anyone with an open mind couldn't help but admit that it's a very funny movie. Because it's a very funny topic. And it makes the point and that's it. I had a thing to say, I made my point, and now I'm getting offstage. I don't think people do that enough in America. I think people linger too much. So I said it and I'm goin' home.

You've got to leave 'em wanting more.
Exactly! That's absolutely the ultimate in show business. And of course in this recession, I must say also, leave 'em wanting more, but not too much more. You really need to make people feel like that was worth their dollar. I kind of joke about it when I go onstage now. I always start off staying, "Thank you for coming out during the recession, and I better fucking be good!" When people are parting with their hard-earned money, they really expect something. So I feel very good at the end of the show when I feel like, "Yes, I gave them their money's worth, and they felt that."

Arts Gettin' All Religious Up in Here