April 06, 2009 at 1:05 PM
comment
David Robertson, the conductor of the St. Louis Symphony Orchestra, is a man of many talents, some of which he displayed at Carnegie Hall in New York last weekend. 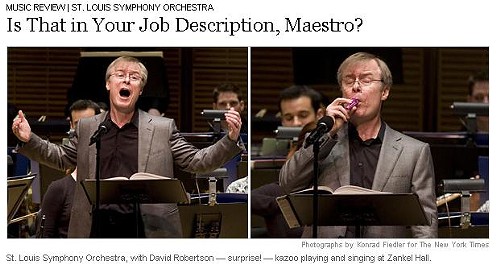 The soloist/kazoo player/slide whistler in question was HK Gruber, who also composed the piece, "Frankenstein!!" Based on contemporary nursery rhymes by H. C. Artmann, the libretto of "Frankenstein!!", among other things, deconstructs Superman and analyzes the sexual relationship of Batman and Robin.


Mr. Gruber intended for the texts to be delivered in a kind of speech-song, complete with nasal squawks and patter. You do not need a proper singing voice to perform the part, but you do have to be uninhibited. Mr. Robertson's performance was a tour de force of uninhibition.

He spouted the words, performed in English translation, with crisp diction and rhythmic bite. When appropriate, he bent phrases with poignant sing-song sweetness. At times he was demonically intense, squeaking phrases like "That's how the mi-ma-monsterlet/goes dancing through our house."

Maybe Robertson's virtuosity shouldn't be surprising to people versed in the ways of orchestras and who know that a conductor should be capable of filling in every part (even the kazoo) of a symphony. Those people probably know, too, that Robertson has a background in musical theater and that he is a genius.

But the rest of us were impressed.

Robertson, by the way, performed his conducting duties admirably on Saturday night during a performance of Sibelius' Fifth Symphony, which Tommasini deemed "the most transparent and riveting account ... in memory."

Sadly for St. Louisans, the SLSO already performed both the Sibelius and "Frankenstein!!" (with Gruber) here on March 27 and 29, and SLSO spokesman Adam Crane says Robertson is not scheduled to make a singing debut at Powell Hall.

But, he adds via e-mail, "one never knows given the success, buzz created by these concerts."