Chuck Berry's Nephew Trey Is the Laughingstock of the Family 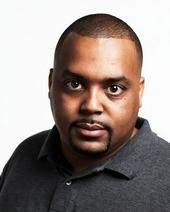 And he's proud of it.
The younger Berry will perform on Monday night at Blueberry Hill, headlining a night of stand-up comedy on the same stage at the Duck Room where his legendary uncle performs monthly.
Berry says he's been working the comedy circuit off and on for nearly two years now but has waited this long to perform in his hometown.
"I didn't want to tread bad on the family name," Berry says. "I wanted to get good before I put myself out there like that and I think I'm to that point now."
Berry describes his act as a combination of Redd Foxx and Chris Rock, and says his targets include politics, relationships and celebrities.
"It's no holds barred," he says. "Take Madonna. Madonna is nuts. Looking down Madonna's pussy is like looking down the tunnel at the All-star game: It's nothing but smoke, lights and professional athletes."
When he's not telling jokes, Berry works as a bail bondsmen in the St. Louis area. He's been quoted on that subject in the RFT and was recently featured on a FOX 2 broadcast about the profession.
He says he penned a movie script about the life of Redd Foxx called "Dirty Redd," the rights to which were recently purchased by Sony Entertainment.
Tickets for Monday's show are $50. They include an open bar.