There's a new book out chronicling the rags-to-riches tale of Bernarr Macfadden, a sickly child from the Missouri Ozarks who moved to St. Louis in the late 1800s.

While in St. Louis Macfadden discovered the virtues of weight-lifting and physical exertion -- even spending some time on the regional wrestling circuit -- before moving to New York to make his fortune as the publisher of risque fitness magazines and general-interest tabloids.

If the review last weekend in Wall Street Journal is half as good as the book, Mr. America promises to be a hell of a read. 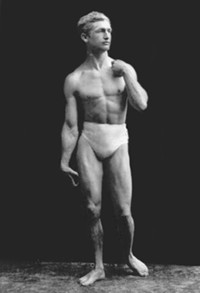 Macfadden launched his first magazine, Physical Culture, in 1899. The publication served to rail against what Macfadden considered the "curses of humanity" -- drugs, alcohol, muscular inactivity, gluttony, prudishness and corsets. Six years after the launch, Macfadden would be arrested for running posters of near-naked female athletes to promote the magazine.

The brush with the law only propelled his rise to fame. Macfadden went on to publish the immensely popular True Story magazine. And later, in the 1920s, he founded New York Evening Graphic, a 1920s publication often dubbed the "Porno-Graphic" for its purple prose and borderline-obscene photos.

Along the way Macfadden would befriend Italian dictator Benito Mussolini, employ Eleanor Roosevelt as an editor and groom the nation's first gossip columnist, the storied Walter Winchell. Oh yeah, and Macfadden once beat the living snot out of another publisher of his day (and fellow Missouri transplant), Joseph Pulitzer. Okay, I made the last one up. But Macfadden could have kicked Pulitzer's ass had we wanted. Of that, I'm sure.